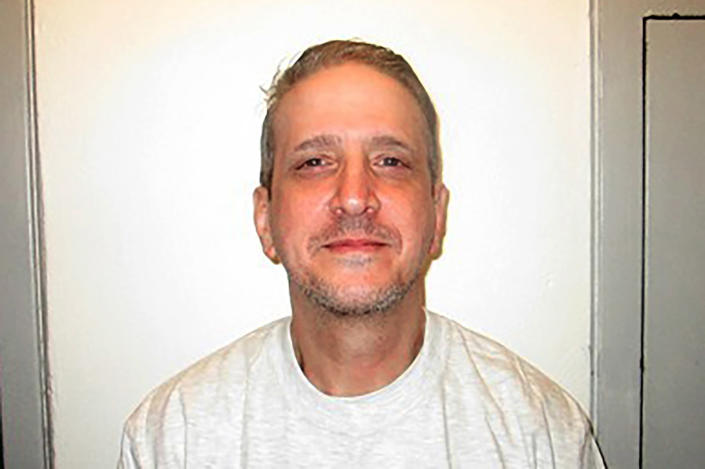 Attorneys for an Oklahoma death row inmate whose halted execution in 2015 led to a state moratorium on the death penalty requested a new hearing Thursday, alleging that prosecutors had failed to disclose key evidence that could have resulted in a different outcome at his trial or in his petition for a new one.

A report initiated at the request of Oklahoma state legislators in the capital murder case against Richard Glossip contends that the state’s primary witness, Justin Sneed, confirmed to investigators in interviews this summer that he has had discussions with multiple family members about “recanting” his testimony.

In addition, the report said, investigators found that the district attorney’s case file included documentation describing how the state provided Sneed information “so he could conform his testimony to match the evidence” from other witnesses.

Glossip, a motel manager in Oklahoma City, was convicted in the 1997 killing of his boss, Barry Van Treese. Sneed, a motel handyman, admitted at trial that he killed Van Treese, but said that it was at Glossip’s direction and that he had been promised $10,000. In exchange for testifying against Glossip, Sneed received a life sentence while Glossip was given the death penalty.

Prosecutors alleged Glossip orchestrated the plot because he was embezzling from the motel and feared being fired. Glossip, now 59, has long maintained his innocence.

“This newly obtained evidence establishes not only a pattern of Sneed discussing ‘recanting’ to individuals he trusts at various times spanning a period of over a decade, but also conduct by the State before and during Glossip’s retrial that reveal its concerns over Sneed’s reliability and credibility,” according to the report, which was prepared by the Pittsburgh-based law firm Reed Smith LLP. The firm released an initial report in June.

As a result of the latest report, Glossip’s lawyers said Thursday they filed a so-called Brady motion, intended to compel prosecutors to turn over any evidence they may have that could help the defense. Failure to do so could result in a conviction being reversed.

“Rich Glossip is a nobody. He’s not some powerful person. He’s just like all the rest of…