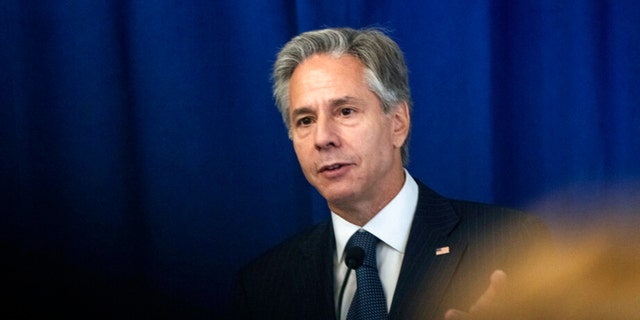 Protests continue to grow following the death of Mahsa Amini, a 22-year-old who police arrested and allegedly beat to death for violating strict laws requiring women to cover their hair. (Credit: MEK)

The U.S. announced it would impose sanctions on senior Iran security officials and Iran’s morality police following the death of 22-year-old Mahsa Amini.

She had been detained for allegedly failing to properly wear the hijab (headscarf).

“In response to this and other human rights violations in Iran – including the violent suppression of peaceful protests – the United States is imposing sanctions on Iran’s Morality Police and senior security officials who have engaged in serious human rights abuses, pursuant to Executive Order 13553,” Blinken said in a statement. “The Morality Police, an element of Iran’s Law Enforcement Forces (LEF), arrests women for wearing ‘inappropriate’ hijab and enforces other restrictions on freedom of expression. The Treasury Department’s Office of Foreign Assets Control (OFAC) is further designating Haj Ahmad Mirzaei and Mohammad Rostami Cheshmeh Gachi, both of whom are senior officials in the Morality Police.”

Secretary of State Antony Blinken speaks about an initiative to support Afghan women during the 77th session of the U.N. General Assembly in New York, Tuesday, Sept. 20, 2022.
(David Dee Delgado/Pool Photo via AP)

“These individuals have been all involved in the suppression and killing of nonviolent protesters,” Blinken noted.

“The Iranian government needs to end its systemic persecution of women and allow peaceful protest. The United States will continue to voice our support for human rights in Iran and hold those who violate them to account,” he said.

“Mahsa Amini was a courageous woman whose death in Morality Police custody was yet another act of brutality by the Iranian regime’s security forces against its own people,” Secretary of the Treasury Janet Yellen said in a release. “We condemn this unconscionable act in the strongest terms and call on the Iranian government to end its violence against women and its ongoing violent crackdown on free expression and assembly. Today’s action to…