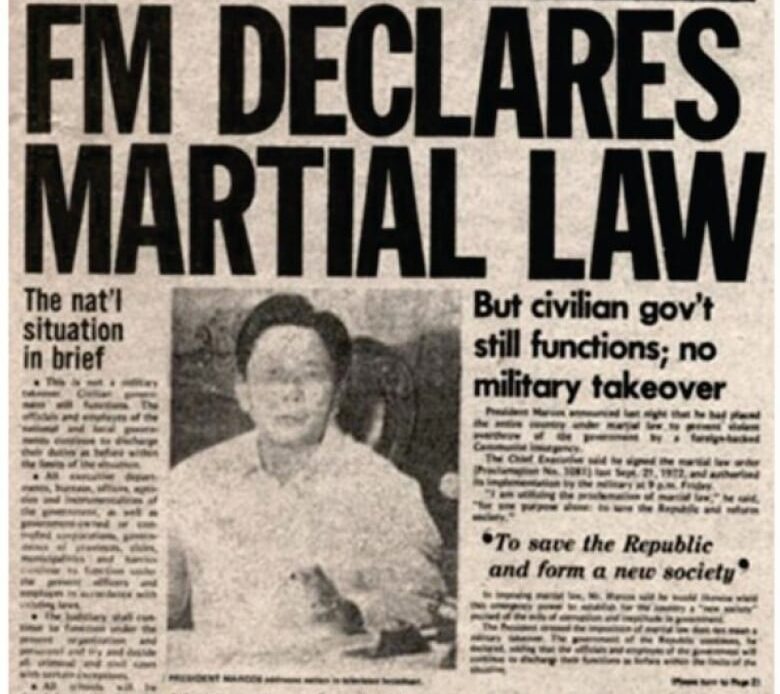 The Current25:29Survivors remember declaration of martial law in the Philippines

Warning: This story contains graphic details of torture that may be disturbing to readers.

On the morning of Sept. 23, 1972, Chris Sorio remembers being awoken by his mother at their home in Quezon City in the Philippines. She told him that the country had just been placed under martial law.

“There’s nothing on TV and nothing on the radio,” said Sorio, who was a teenager at the time. He is now 64 and living in Vancouver. “So there’s chaos and confusion among people because they don’t know what’s happening.”

Later that evening, President Ferdinand Marcos appeared on television to formally announce that he had declared martial law. (The official document, Proclamation No. 1081, was signed on Sept. 21, a date historians believe Marcos chose because of his obsession with numerology.)

What followed was 14 years of corruption, violence and human rights abuses. It’s estimated that more than 3,000 were killed, 35,000 tortured and 70,000 incarcerated, based on reports from Amnesty International. In 1986, Marcos was ousted from office following mass protests known as the People Power Revolution. He fled to Hawaii, where he died in exile in 1989.

Fifty years after the declaration of martial law in the Philippines, survivors and activists in the country and around the world are commemorating what’s widely considered to be a dark chapter in the country’s history – a mission they feel is even more important since Marcos’s son, Ferdinand (Bongbong) Marcos Jr., was elected to the presidency this past May in a landslide victory.

“I have little kids [and] I want them to know. They need to know the truth, the history of what happened in Marcos’s dictatorship,” said Reyna de Mesa, co-founder of the Philippine-Manitoba Historical Society in Winnipeg.

The group is hosting an event on Friday at the Canadian Museum for Human Rights that will feature in-person and virtual exhibits, a film screening and a discussion with a martial law survivor.

De Mesa and co-organizer Jomay Amora-Dueck said they decided to hold the event after the recent election of Marcos Jr.

“We want to educate our community, especially here in Canada, where a lot of young Filipino Canadians don’t have access to Philippine history because they live in Canada,”…