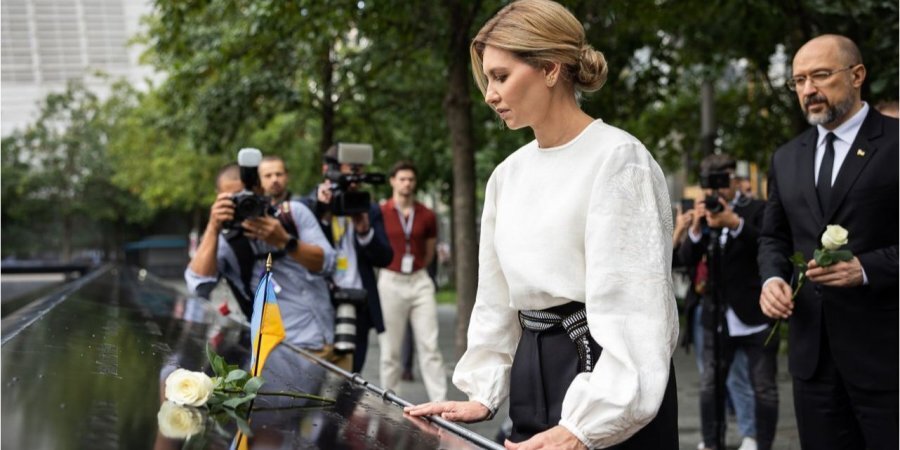 During her brief visit, she had several high-level meetings, launched a charity foundation, and held the first fundraiser at Metropolitan Opera. The first lady attended the General Assembly, proudly observed the standing ovation her husband’s speech got at the UN, and got assurances that partners will continue to support Ukraine.

During the meeting with the UN Secretary-General Antonio Guterres, Zelenska asked him to persuade Russian officials to share information on the whereabouts of more than 7000 Ukrainian children forcibly taken to Russia.

“I have to take every opportunity to do the work. And I can say that the support is still huge for Ukraine, “Zelenska said. “So many people were approaching me and asking what else can they do, how else can they help.”

The visit to General Assembly helped the Ukrainian first lady to meet new people, new heads of state, as well as first ladies she already knew. “I can say that we’ve almost talked like friends. No more formal speeches. We immediately get to the point.”

At every meeting with other first ladies, Zelenska talked about Ukrainian refugees, living in their countries. More than 7,5 million Ukrainians, mostly women, and children have fled only to other European countries since February, UNHCR has reported.  Overall 14 million Ukrainians were forced to leave their homes due to Putin’s war, according to the UN.

“I was pleased to hear they learn foreign languages very fast. Yet I urged our partners to allow our kids to include Ukrainian language, literature, and history studies in their curriculum,” Zelenska said.

“It can be done if they also join Ukrainian school studies online.”

Zelenska has also discussed the ongoing evacuation of Ukrainians diagnosed with different forms of cancer, and other patients for treatment abroad. “We are creating a community with other first ladies, where everyone is on the same page,” Zelenska said.

On Sept. 21 Zelenska attended Ukrainian President Volodymyr Zelensky’s pre-recorded speech at the General Assembly Hall. She liked the vibe of the assembly and was proud when she saw more and more people showing up in the half-empty hall…