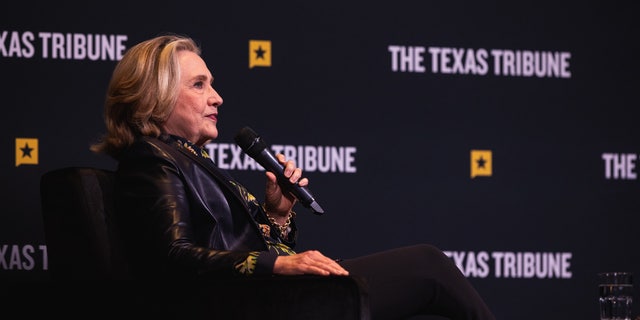 AUSTIN, Texas — Hillary Clinton chimed in on the FBI’s raid of Mar-a-Lago on Friday, calling former President Trump’s handling of documents “deeply disturbing” while denying that she ever had classified information on a private email server at her home.

“He’s gone from nothing was there, FBI planted it, then if stuff was there, I had I right to have it there, and now this latest claim, ‘I declassified it in my mind,'” Clinton told a crowd at the Texas Tribune Festival in Austin on Friday.

“I’m sick about talking about my emails, but I do think it’s important to remember at the end of the day, after two parts of an FBI investigation, two separate State Department investigations – one under Tillerson and one under Pompeo, so the Trump years – they did not find one piece of paper of any kind marked classified. Zero.”

Hillary Clinton, former US Secretary of State, speaks during The Texas Tribune Festival in Austin, Texas, US, on Friday, Sept. 23, 2022.
(Jordan Vonderhaar/Bloomberg via Getty Images)

Former FBI Director James Comey declined to recommend prosecution of the former secretary of state in 2016, but said at the time that “110 e-mails in 52 e-mail chains have been determined by the owning agency to contain classified information,” including eight chains marked at the top secret level and 36 chains marked secret.

Clinton accused Comey on Friday of upending the 2016 election by telling Congress just days before voters hit the polls that a new tranche of emails that may contain classified information were discovered on Anthony Weiner’s laptop. He sent a follow-up email two days before the election clearing her of any charges.

“If I were secretary of state again, I wouldn’t use another server. I would use the unsecured often-hacked-into state department servers. That’s what I would do,” Clinton said sarcastically on Friday.

The Department of Justice Inspector General later wrote in 2018 that an investigation found “81 email chains containing approximately 193 individual emails that were classified from the CONFIDENTIAL to TOP SECRET levels at the time the emails were drafted on UNCLASSIFIED systems and sent to or from Clinton’s personal server.”