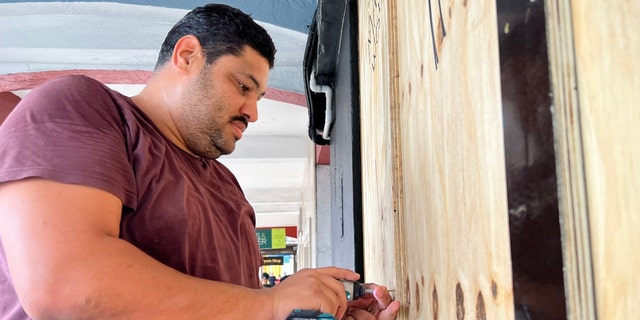 Hurricane Fiona is moving away from Bermuda early Friday.

A hurricane warning for the island was downgraded to a tropical storm warning.

The National Hurricane Center said hurricane conditions were expected to begin in Atlantic Canada in the evening.

Hurricane and tropical storm warnings were in effect for the region.

The Category 3 hurricane was moving north-northeastward near 25 mph, with its center expected to approach Nova Scotia and move into the Gulf of St. Lawrence on Saturday.

Its maximum sustained winds are near 125 mph, with higher gusts.

A man boards up a store in Hamilton on September 22, 2022.
(Photo by SEBASTIEN VUAGNAT/AFP via Getty Images)

Hurricane-force winds extend outward up to 115 miles from the center, with tropical-storm-force winds reaching 345 miles.

Swells generated by the hurricane are impacting the Turks and Caicos Islands, the Bahamas, the southeastern U.S. coast and Bermuda.

A palm tree stands in the wind in Church Bay, Bermuda, as Hurricane Fiona churned towards the Atlantic island as a powerful Category 4 storm on September 22, 2022.
(Photo by SEBASTIEN VUAGNAT/AFP via Getty Images)

“These swells will continue to spread northwestward across the western Atlantic toward the mid-Atlantic and northeast coasts of the United States and Atlantic Canada today. These swells are likely to cause life-threatening surf and rip current conditions,” the hurricane center said in an advisory.

Some slight weakening was forecast for Friday, but Fiona is expected to be a large and powerful post-tropical cyclone with hurricane-force winds when it approaches and moves over Nova Scotia.

The storm is expected to cross Labrador and the Labrador Sea on Sunday.

Julia Musto is a reporter for Fox News Digital. You can find her on Twitter at @JuliaElenaMusto.