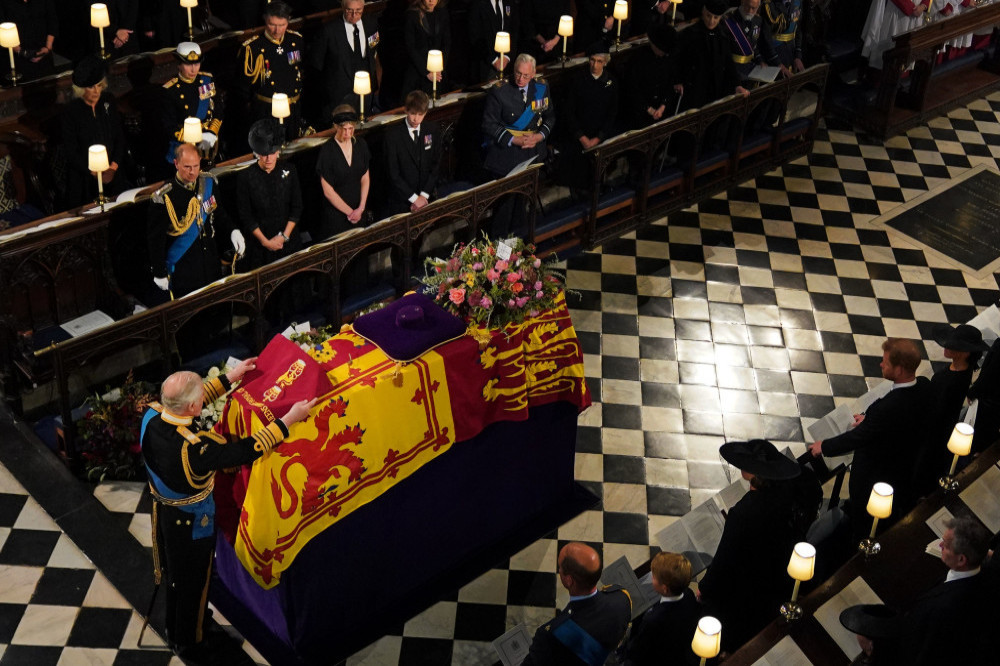 Queen Elizabeth’s name has been inscribed on a black marble slab alongside those of her husband Prince Philip’s and her parents to mark the monarch’s final resting place.

The first photograph of the simple memorial was passed to the Mail Online by a member of the public who took it inside the King George VI memorial chapel.

A previous image of the black Belgian marble from 2002 only showed gold lettering for George VI and the Queen Mother along with the dates of their birth and deaths.

An insignia in between the two couples is the metal Garter Star – the sign of the Order of the Garter, which is Britain’s oldest and most noble order of chivalry.

All four were members of the order and St George’s Chapel, where the King George VI memorial chapel is situated.

Wreaths were also seen around the slab in shades of pink, deep burgundy, white and gold – to reflect the Royal Standard.

There was also rosemary to signify remembrance, as well as myrtle, a symbol of happy marriage, and English oak to signify the strength of love.

The woman who took the picture told Mail Online on Friday (23.09.22): “I went in there for a prayer service and was luckily enough to be able to view the final resting place of Her Majesty.

“As you can imagine it was very moving to be able to pay my respects to our beloved Queen. I recognised the stone from pictures I’d seen in the media over the funeral period but I soon realised that the names of the Queen and Prince Philip had since been added.

“It was very moving to see their names like that and think of them together for eternity. And I feel extremely fortunate to have been among the first members of the public to have been able to see this.

“I’m sure others will want to travel to see this in the future as it’s such a simple but beautiful motif, and so many millions of people were so moved by the Queen’s death.”

The new slab is understood to have been laid after the Queen’s state funeral on September 19, and seen after St George’s Chapel opened again for regular church services on Wednesday. (21.09.22)

Members of the public will be…