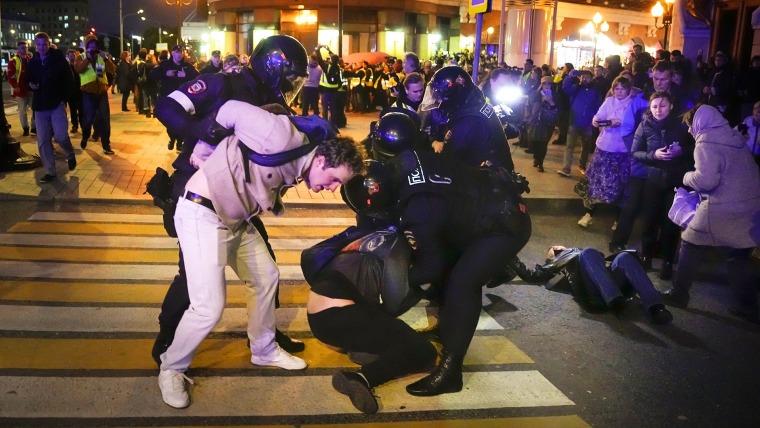 As four occupied regions of Ukraine began holding controversial referendums on whether to join Russia on Friday, Russian men continued to flee the country as a result of President Vladimir Putin’s plans to raise more troops to bolster his faltering invasion of his smaller neighbor.

The voting in Ukraine’s occupied Donetsk, Luhansk, Zaporizhzhia and Kherson regions has already been condemned as a sham by Kyiv and its Western allies, including the United States.

Friday was the first day of a five-day period of voting in the regions after their Russian-installed officials rushed to announce the referendums earlier this week.

The Russian state news agency Tass reported that for “safety reasons,” election officials would take ballots to people’s homes. Voting at actual polling stations would only take place on the last day. It said polling stations have also been set up inside Russia for Ukrainian residents who had evacuated there.

The questions on the ballots will ask voters if their regions should join Russia, the news agency said, adding there was no mention of an option to stay as part of Ukraine.

The balloting will wrap up Tuesday, but the outcome is almost guaranteed to go Moscow’s way. The U.S. and its Western allies have said it’s likely Russia will manipulate the results and use them as a pretext to annex sovereign Ukrainian territory.

Moscow-backed officials in the occupied areas celebrated the election. Denis Pushilin, Moscow-backed separatist leader in Donetsk, called the referendum “a historical milestone” in a video recording Friday, adding: “We are coming home.”

The rush to hold the referendums is widely seen as Putin’s attempt to maintain control of the occupied regions amid Ukraine’s battlefield successes and a lightning counteroffensive in the northeast earlier this month.

If the regions vote to join Russia, Moscow is likely to claim them as part of its territory. Putin warned this week that he could resort to using nuclear weapons should Russia’s territorial integrity be threatened, which could mean that any Ukrainian effort to retake the annexed regions could precipitate a nuclear confrontation.

As the voting started on Friday, Kremlin spokesperson Dmitry Peskov reiterated that Moscow would consider any Ukrainian attempts to return the regions that are holding the referendums as an attack on Russia, if they vote to join the country, Tass quoted him as saying.