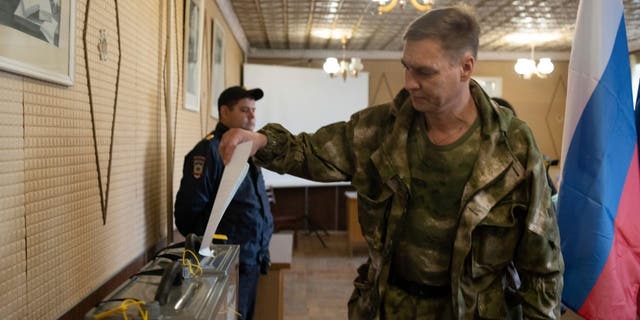 Fox News correspondent Jeff Paul reports from Kyiv, Ukraine where Russian President Vladimir Putin announced ahead of a United Nations summit that he plans to annex new regions in the war-torn nation on ‘America Reports.’

Russian proxies overseeing the referendums in occupied areas of Ukraine Friday have begun intimidating citizens who remain in war-torn areas, forcing them to “vote.”

Occupying regional officials in Luhansk, Dontesk, Zaporizhzhia and Kherson began voting Friday on whether Ukrainians in the occupied regions will allegedly decide to secede from Ukraine and join Russia – a process Western nations have called a “sham.”

According to one local Ukrainian official in Luhansk, Russian proxies, accompanied by “armed men,” have begun knocking on people’s doors to force them to vote.

“If a person doesn’t open the door, (Russian forces) threaten to break in. When a person ticks ‘no’ in the ‘ballot,’ they make notes,” Luhansk Governor Serhii Haidai said on Telegram, according to a translation by Kyiv Independent.

Russian news outlets said “voting” would begin Friday at people’s homes for “security reasons,” and that polling stations will be opened Tuesday, the final day of voting.

Though some in-person polling stations have been opened in the Donbas.

The Luhansk governor claimed that “door-to-door search[es]” were being completed to find fighting-age men for mobilization as Russia looks to beef up its forces.

Preliminary vote results will allegedly be released Tuesday and Wednesday.

Residents cast their votes in controversial referendums in the city of Dokuchaievsk, Donetsk Oblast, Ukraine on Sept. 23, 2022.
(Leon Klein/Anadolu Agency via Getty Images)

Ukrainian President Volodymyr Zelenskyy called the elections a “farce” and reaffirmed that Kyiv’s military aims will not change no matter what Russia claims the referendum outcomes are.

Moscow has already threatened to treat any attack on the Donbas, which is made up of both the Donetsk and Luhansk regions and where fighting continues, as an attack on Russia if the regions “vote” in the…