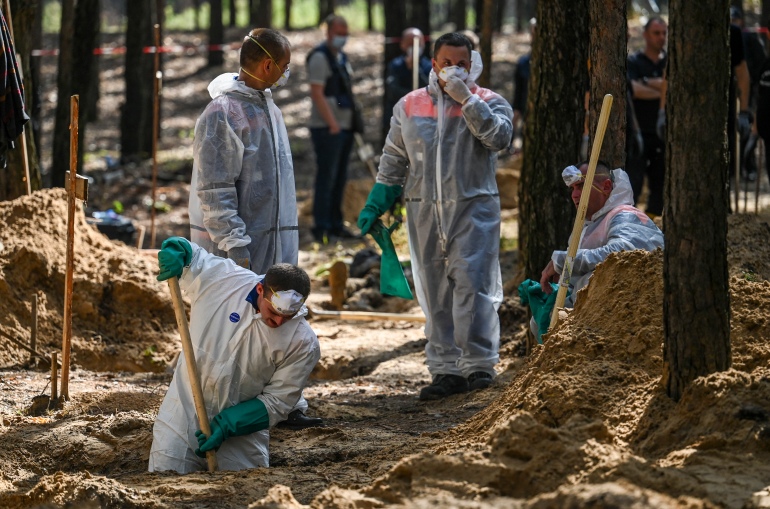 Investigators visited graves and detention and torture centres, and interviewed more than 150 victims and witnesses.

United Nations investigators have concluded that war crimes have been committed in the Ukraine conflict, listing Russian bombardment of civilian areas, executions, torture and sexual violence.

A team of three independent experts visited 27 towns and settlements, as well as graves and detention and torture centres in four regions – Kyiv, Chernihiv, Kharkiv and Sumy. Their findings are based on interviews with more than 150 victims and witnesses.

“Based on the evidence gathered by the commission, it has concluded that war crimes have been committed in Ukraine,” Erik Mose, the head of the investigation team, told the UN Human Rights Council on Friday.

The categorical nature of the statement was unusual. UN investigators typically couch their findings on international crimes in conditional language, referring the final confirmation of war crimes and similar violations to courts of law.

The council was set up by the Commission of Inquiry (COI) – the highest possible level of investigation – in May to investigate crimes following Russia’s invasion of Ukraine in late February.

Speaking a day before the seven-month anniversary of the war, Mose pointed to “the Russian Federation’s use of explosive weapons with wide area effects in populated areas”, which he said was “a source of immense harm and suffering for civilians”.

Mose highlighted that a number of attacks the team had investigated “had been carried out without distinguishing between civilians and combatants”, including attacks with cluster munitions in populated areas.

The team, which plans to broaden the probe beyond the four regions, had been especially “struck by the large number of executions in the areas” that they visited, Mose said, and the frequent “visible signs of executions on bodies, such as hands tied behind backs, gunshot wounds to the head, and slit throats”.

Mose said the commission was currently investigating such deaths in 16 towns and settlements, and had received credible allegations regarding many more cases which it would seek to document.