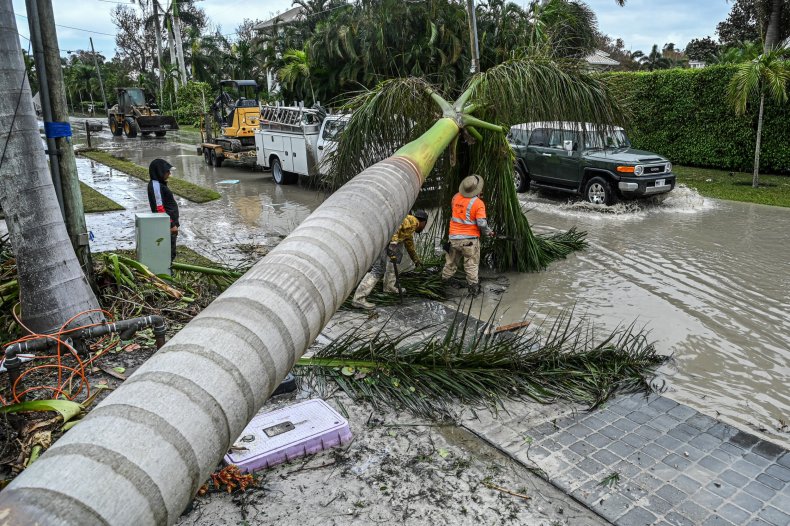 A cameraman dropped his equipment and ran to aid a family fleeing Hurricane Ian’s floods during a live news broadcast on Wednesday.

Hurricane Ian left a trail of staggering wreckage in Florida, where it struck as a Category 4 hurricane with maximum sustained winds of 150 miles per hour, one of the strongest storms to strike the United States. Florida officials reported at least 21 people dead as the storm barreled toward South and North Carolina on Friday.

Floridians beginning to assess the damage have captured gutted homes and businesses, toppled trees and floating cars across coastal cities like Fort Myers, which, a local politician said, “will need to be completely rebuilt.” Sanibel Island was left severed from the rest of Florida after parts of Sanibel Causeway completely washed away, leaving the community “forever changed,” said Mayor Holly Smith.

In Naples, where flooding ejected people from their homes and heavily damaged the historic Naples Pier, an Australian cameraman interrupted news coverage by sprinting to help hurricane victims. A video of his rescue efforts has circulated broadly on social media.

Glen Ellis, a cameraman for the Sunrise morning show on Australia’s Channel 7 News, was filming correspondent Tim Lester when he placed his camera on the ground and ran into muddy floods on Wednesday. In the background of the shot, residents were struggling to cross the waters while carrying their children, water and scant belongings.

“We’re just helping some people through the water here,” said Lester, now off-screen as the camera lay at his feet. “That’s our camera operator Glen Ellis out there, I think you can see, trying to help people who are wading away from their homes.”

Ellis ran into the flood three times to help stumbling residents carry their items. At one point, a person fell into the water and he helped them back up, supporting them until they reached higher ground.

Meanwhile, Lester went on, “We’ve spoken to a couple of them and they tell us already that their houses have been lost in the water. They’re flooded right through and they’ve had to abandon them.”

As the cameraman returned and directed his camera back to Lester, the correspondent said, “Good job, Glen.”

After the segment aired,…