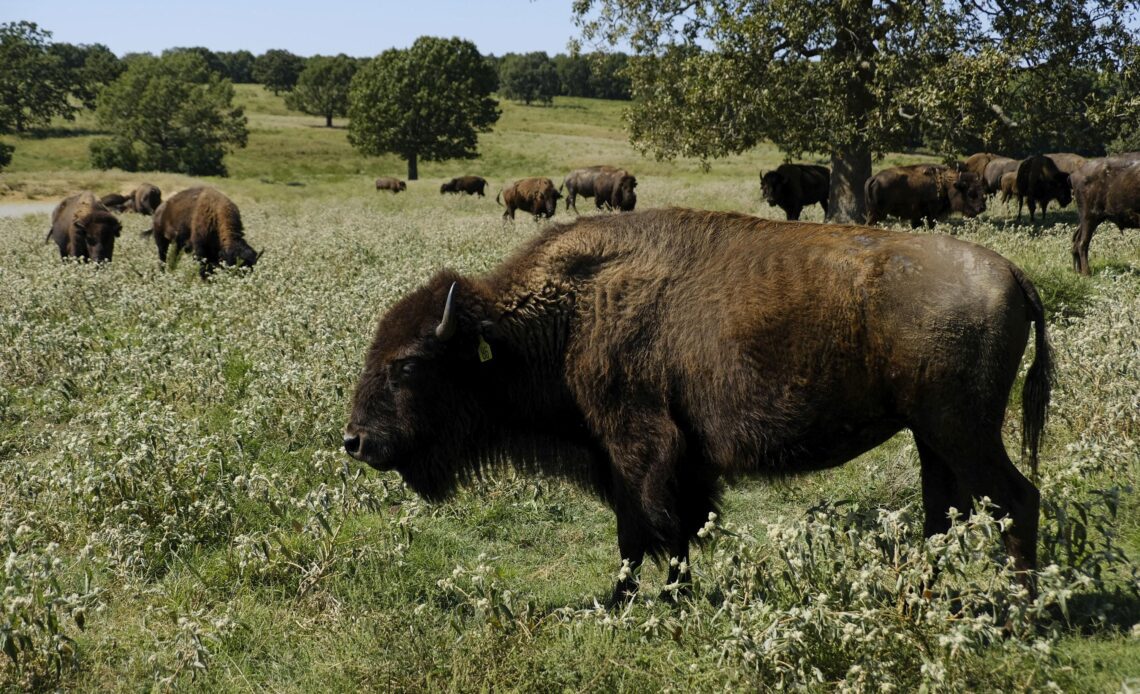 BULL HOLLOW, Okla. (AP) — Ryan Mackey quietly sang a sacred Cherokee verse as he pulled a handful of tobacco out of a zip-close bag. Reaching over a barbed wire fence, he scattered the leaves onto the pasture where a growing herd of bison — popularly known as American buffalo — grazed in northeastern Oklahoma.

The offering represented a reverent act of thanksgiving, the 45-year-old explained, and a desire to forge a divine connection with the animals, his ancestors and the Creator.

“When tobacco is used in the right way, it’s almost like a contract is made between you and the spirit — the spirit of our Creator, the spirit of these bison,” Mackey said as a strong wind rumbled across the grassy field. “Everything, they say, has a spiritual aspect. Just like this wind, we can feel it in our hands, but we can’t see it.”

Decades after the last bison vanished from their tribal lands, the Cherokee Nation is part of a nationwide resurgence of Indigenous people seeking to reconnect with the humpbacked, shaggy-haired animals that occupy a crucial place in centuries-old tradition and belief.

“Collectively those tribes manage over 20,000 buffalo on tribal lands,” said Troy Heinert, a Rosebud Sioux Tribe member who serves as executive director of the InterTribal Buffalo Council, based in Rapid City, South Dakota. “Our goal and mission is to restore buffalo back to Indian country for that cultural and spiritual connection that Indigenous people have with the buffalo.”

Centuries ago, an estimated 30 million to 60 million bison roamed the vast Great Plains of North America, from Canada to Texas. But by 1900, European settlers had driven the species to near extinction, hunting them en masse for their prized skins and often leaving the carcasses to rot on the prairie.

“It’s important to recognize the history that Native people had with buffalo and how buffalo were nearly decimated. … Now with the resurgence of the buffalo, often led by Native nations, we’re seeing that spiritual and cultural awakening as well that comes with it,” said Heinert, who is a South Dakota state senator.

Historically, Indigenous people hunted and used every part of the bison: for food, clothing,…