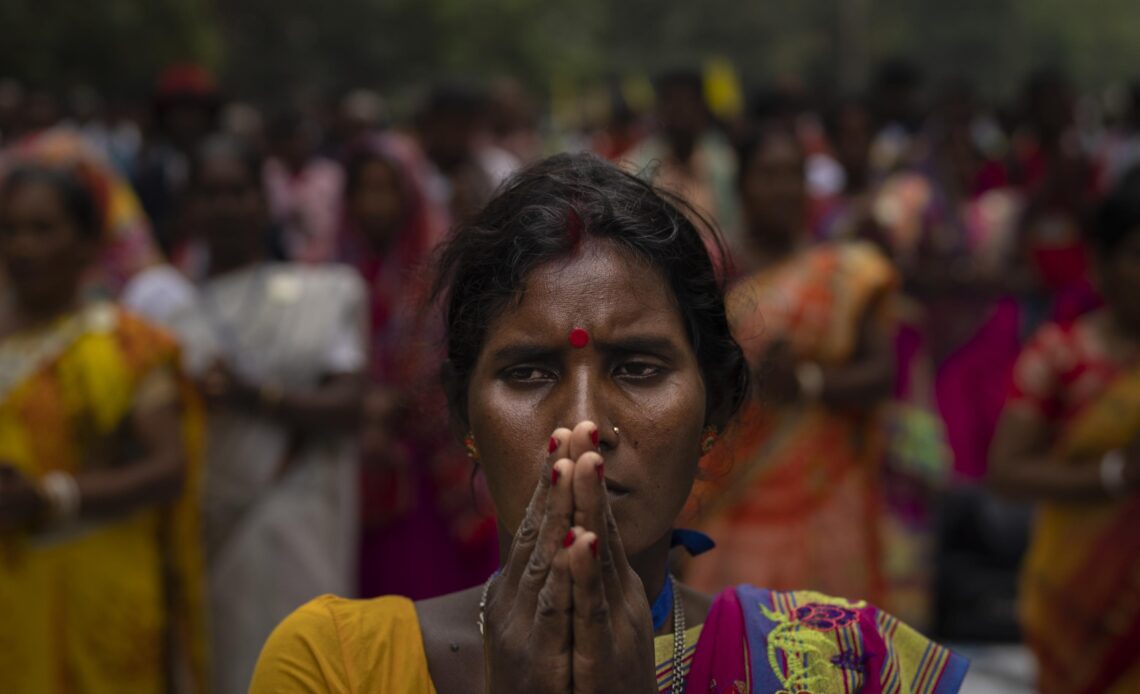 GUDUTA, India (AP) — The ritual began with a thunderous roll of leather drums, its clamor echoing through the entire village. Women dressed in colorful saris broke into an Indigenous folk dance, tapping and moving their feet to its galloping rhythm.

At the climax, 12 worshippers — proudly practicing a faith not officially recognized by the government — emerged from a mud house and marched toward a sacred grove believed to be the home of the village goddess. Led by the village chieftain Gasia Maranda, they carried religious totems — among them an earthen pitcher, a bow and arrow, winnowing fan and a sacrificial axe.

Maranda and others in Guduta, a remote tribal village in India’s eastern Odisha state that rests in a seemingly endless forest landscape, are “Adivasis,” or Indigenous tribespeople, who adhere to Sarna Dharma. It is a belief system that shares common threads with the world’s many ancient nature-worshipping religions.

On that day inside the grove, worshippers displayed their reverence for the natural world, making circles around a Sal plant and three sacred stones, one each for the malevolent spirits they believe need pleased. They knelt as Maranda smeared the stones with vermillion paste, bowed to the sacred plant and laid down fresh leaves covered in a cow dung paste.

“Our Gods are everywhere. We see more in nature than others,” said Maranda, as he led the men back to their homes.

But the government does not legally acknowledge their faith — a fact that is increasingly becoming a rallying point for change for some of the 5 million or so Indigenous tribespeople in the country who follow Sarna Dharma. They say formal recognition would help preserve their culture and history in the wake of the slow erosion of Indigenous tribespeople’s rights in India.

Citizens are only allowed to align themselves with one of India’s six officially recognized religions — Hinduism, Buddhism, Christianity, Islam, Jainism and Sikhism. While they can select the “Others” category, many nature worshippers have felt compelled by the country’s religious affiliation system to associate with one of the six named faiths.

Tribal groups have held protests in support of giving Sarna Dharma official religion status in the run-up to the upcoming national census, which has citizens state their religious affiliation.