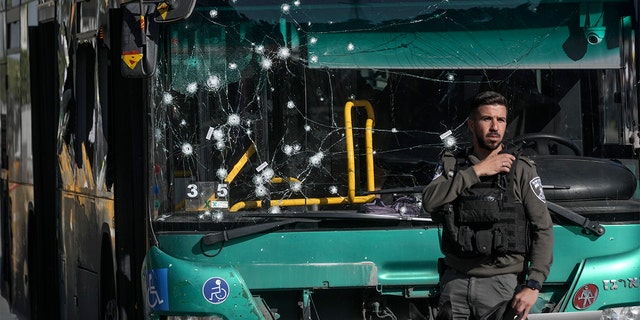 A 16-year-old boy killed in one of the blasts has been identified as Aryeh Shechopek, a Canadian citizen.

“Heartbroken to confirm that a young Canadian lost his life in this morning’s reprehensible terror attack in Jerusalem,” Canadian Ambassador to Israel Lisa Stadelbauer tweeted. “Our sincere condolences to his family and friends, and to others wounded in this attack.  Canada continues to condemn all forms of terror.”

“U.S. Embassy condemns in strongest possible terms today’s terrorist attacks on public locations in Jerusalem and offers sincere condolences to the victims and their loved ones,” the American Embassy in Jerusalem tweeted. “We are closely monitoring the situation. Terrorism is a dead-end that accomplishes absolutely nothing.”

Israeli police inspect the scene of an explosion at a bus stop in Jerusalem, Wednesday, Nov. 23, 2022.
(AP Photo/Mahmoud Illean)

“My heart breaks for the families of those who were harmed,” he added.

Members of Zaka Rescue and Recovery team clean blood from the scene of an explosion at a bus stop in Jerusalem, Wednesday, Nov. 23, 2022.
(AP Photo/Maya Alleruzzo)

Police are continuing to investigate and were looking for additional explosive devices in Jerusalem while raising the city’s alertness level.