Names of six victims released in shooting at Virginia Walmart 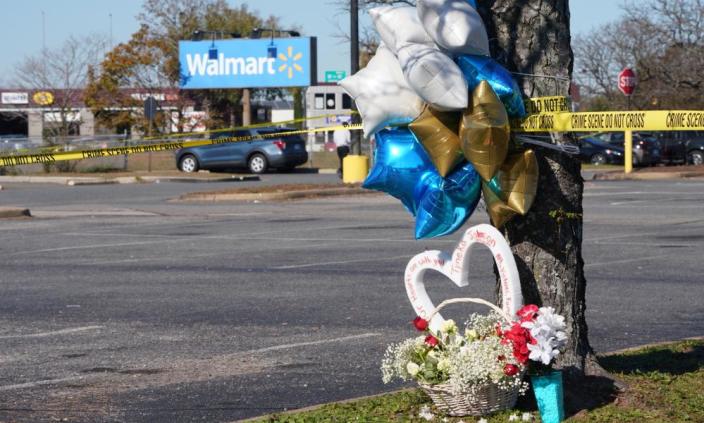 Six people were killed when a gunman opened fire at a Walmart store in southern Virginia late on Tuesday, in the latest mass shooting to strike the US, this time shortly before the Thanksgiving holiday. The gunman killed himself, police said.

A witness, Jessie Wilczewski, told a local TV station, WAVY, the gunman began shooting at a group of about 14 employees gathered in a meeting room at the start of their shift in the store, located in the city of Chesapeake.

Wilczewski, who was on her fifth day at the store, said the shooter was a manager who targeted other managers, firing from left to right and at one point laughing.

“It didn’t even look real,” Wilczewski said, describing “the pow, pow, pow” of the gun.

Briana Tyler, another employee, told ABC workers were gathered as part of their regular routine ahead of their shifts.

“I looked up, and my manager just opened the door and he just opened fire,” Tyler said. “He was just shooting all throughout the room. It didn’t matter who he hit. He didn’t say anything. He didn’t look at anybody in any specific type of way,” she said.

Tyler said the overnight stocking team of 15 to 20 people had just gathered in the break room to go over the morning plan. She said the meeting was about to start, and one team leader said: “All right guys, we have a light night ahead of us.” Then Bing turned around and opened fire on the staff.

At first, Tyler doubted the shooting was real, thinking that it was an active shooter drill.

“It was all happening so fast,” she said, adding: “It is by the grace of God that a bullet missed me. I saw the smoke leaving the gun, and I literally watched bodies drop. It was crazy.”

On Wednesday, the city of Chesapeake identified the gunman as Andre Bing, 31, an overnight team leader who had been a Walmart employee since 2010. Police said he had one handgun and several magazines of ammunition. Three people, including Bing, were found dead in the break room while one deceased victim was discovered near the front of the store, according to the city. Three people died of wounds at the hospital and another six were hospitalized, one in critical condition, the city said.

Tyler, who started working at Walmart two months ago and had worked with Bing just a night earlier, said she never had a negative encounter with him, but others…