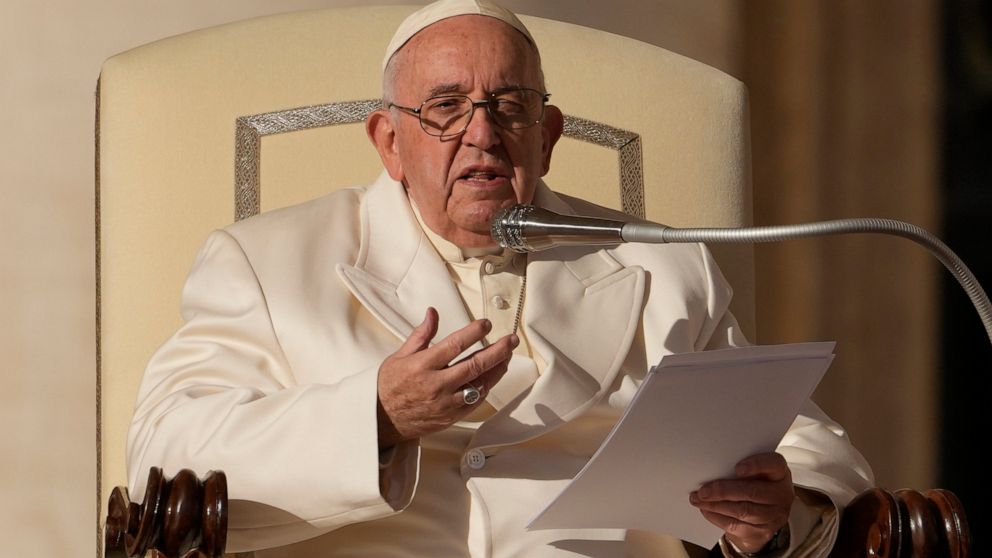 VATICAN CITY — Pope Francis on Wednesday linked the suffering of Ukrainians now to the 1930s “genocide artificially caused by Stalin,” when the Soviet leader was blamed for creating a man-made famine in Ukraine believed to have killed more than 3 million people.

Francis’ linking of the plight of Ukrainian civilians today to those killed by starvation 90 years ago, and his willingness to call it a “genocide” caused by Josef Stalin, marked a sharp escalation in papal rhetoric against Russia. As of this year, only 17 countries have officially recognized the famine, known as the Holodomor, as a genocide, according to the Holodomor Museum in Kyiv.

In comments at the end of his weekly Wednesday general audience, Francis renewed calls for prayers for the “terrible suffering of the dear and martyred Ukrainian people.” He recalled that Saturday marks the 90th anniversary of the start of the famine, which Ukraine commemorates every fourth Saturday of November with a Day of Memory.

“Saturday begins the anniversary of the terrible genocide of the Holodomor, the extermination by starvation artificially caused by Stalin between 1932-1933,” Francis said. “Let us pray for the victims of this genocide and let us pray for so many Ukrainians — children, women, elderly, babies — who today are suffering the martyrdom of aggression.”

Academic opinion remains divided about whether the famine constitutes a “genocide,” with the main question being whether Stalin intentionally wanted to kill Ukrainians as an attempt to quash an independence movement against the Soviet Union, or whether the famine was primarily the result of official incompetence along with natural conditions. Regardless, the “great famine” seeded lingering Ukrainian bitterness toward Soviet Russian rule.

The Vatican, in its 2004 Compendium of the Social Doctrine of the Church, lists Ukrainians along with Armenians and Jews as victims of 20th century genocides and said “attempts to eliminate entire national, ethnic, religious or linguistic groups are crimes against God and humanity itself, and those responsible for such crimes must answer for them before justice.”

Francis has repeatedly called for peace and an end to the war, has sent humanitarian aid to Ukraine and has called incessantly for prayers for the “martyred” Ukrainian people. But he has generally declined to assign blame or even name Russia or President Vladimir Putin, and has repeated the Kremlin’s complaints that…