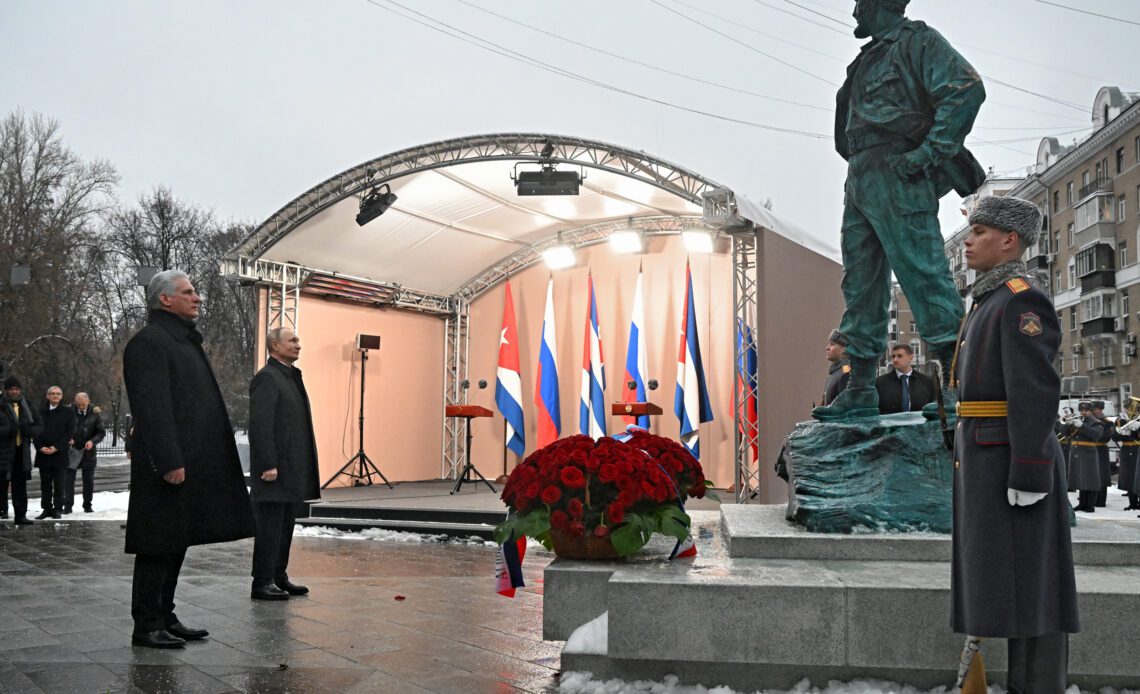 MOSCOW — Russian President Vladimir Putin on Tuesday met with his Cuban counterpart in Moscow, where the two unveiled a monument to Cuban revolutionary leader Fidel Castro and hailed the “traditional friendship” between their sanctions-hit nations.

A video published on the Kremlin’s website showed Putin and the Cuban head of state, Miguel Díaz-Canel, deliver speeches as Russian military guards flanked a bronze statue of Castro.

The late Castro embraced Soviet-style communism after taking a leading role in a revolution which in 1959 drove dictator Fulgencio Batista from power. He went on to defy a crippling U.S. embargo and dozens of assassination plots during his half-century of rule on the island, before dying in 2016 at the age of 90.

Putin in a speech underscored Castro’s history of defiance, praising him for “selflessly defending the sovereignty of (his) native country” and drawing parallels with Western sanctions imposed on Russia in connection with its military campaign in Ukraine.

“The Soviet Union and Russia have always, and continue to this day, to support the Cuban people in their struggle for independence, sovereignty. We have always stood against any sorts of restrictions, embargoes, blockades and so on. We have always supported Cuba on the international stage and we see that Cuba takes the same position towards Russia,” Putin said.

Other top Russian officials struck similar tones in their meetings with Díaz-Canel, who arrived in Moscow on Saturday.

Vyacheslav Volodin, the Russian parliament speaker, called Cuba “a symbol of the struggle of independence” during talks on Tuesday, according to a readout published on the State Duma website.

Russian state agencies also cited Dmitry Medvedev, deputy head of Russia’s powerful Security Council and a former president, as saying that “no sanctions are capable of holding back the development of Cuba and the Russian Federation” as he met the Cuban leader Monday.

According to the State Duma readout, Díaz-Canel asserted that “Russia can always count on Cuba” in his meeting with Volodin on Tuesday, and condemned U.S. sanctions against Moscow as “coercive” and “unfair.”

Díaz-Canel began his visit abroad last Wednesday in Algeria, where he negotiated support for the Cuban energy sector, including an undetermined amount of oil purchase and the donation of a solar power plant. He is set to travel on to Turkey and China.

Trade between Cuba and Russia was about 500 million…