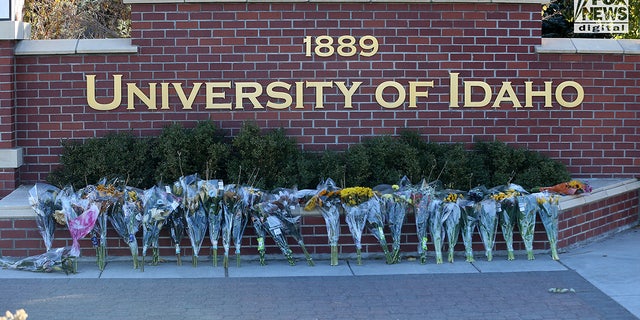 University of Idaho President Scott Green assured students that safety is their top priority in the coming weeks as the college town of 25,000 is left reeling ten days after four students were slayed.

“The brutal murders of Kaylee Goncalves, Madison Mogen, Xana Kernodle, and Ethan Chapin have shaken our close-knit community to the core and brought fear and devastating pain to our Vandal family,” Green said in a message to the community. “We are sad and we are angry. We are struggling to make any sense of it.”

Flowers at an improvised memorial at the University of Idaho in Moscow, Idaho Monday, November 21, 2022, for four of its students who were slain on November 13.
(Derek Shook for Fox News Digital)

More than 100 law enforcement officers from the FBI, Idaho State Police, and Moscow Police Department are investigating the murders in Moscow, Idaho, but authorities still have not identified a suspect or located a murder weapon.

“Even with these extra resources, it is unclear how long this investigation will take,” Green said. “That is deeply frustrating for all of us who are waiting for this criminal to be arrested.”

Students at the university, located on the border with Washington state, will have the ability to learn remotely if they feel uncomfortable on campus for the final two weeks of the fall semester.

U of I is just seven miles east of Washington State University, which is home to nearly 30,000 students and has increased police patrols to assure the campus is safe.

“I recognize that even with these safety protocols in place, some of you may feel uneasy about returning to campus,” WSU Chancellor Elizabeth Chilton told students in a message on Tuesday. “The Provost’s Office has been working directly with Pullman faculty on all the options available for students, and have asked them to exercise understanding and grace throughout this trying time.”

Investigator tapes the door shut at the  house in Moscow, Idaho Tuesday, November 22, 2022, where four people were slain on November 13.
(Derek Shook for Fox…