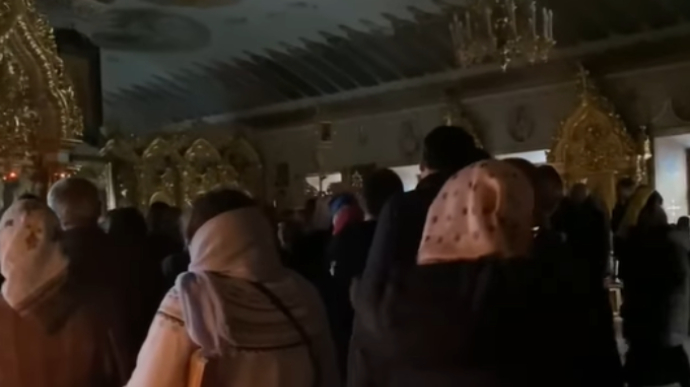 Ukrainian Orthodox Church of Moscow Patriarchate (UOC-MP) calls the video of the praying “for Russia” in the Kyiv Pechersk Lavra (the Monastery of the Caves)  a “provocation”, and adds that law enforcement should investigate it.

Source: Metropolitan Klyment, Head of the Information and Education Department of the UOC-MP

Quote: “As far as I know, the author of the video posted on social media has previously refused to provide the device on which he recorded it to confirm its authenticity.

Officials of the Lavra have already stressed that the video does not show the presence of priests or church singers, and the clergy of the monastery are not involved in singing these hymns…

This stems at least from the fact that the Lavra services are performed not in Russian, but in the Church Slavonic language. And who and what the monks actually pray for every day can be clearly seen from the broadcasts of the Lavra service during the daily prayer for the cessation of the war waged by Russia against our country, as well as requests to God for blessing and protection for the Ukrainian authorities and the Ukrainian army.”

Details: Klyment added that many parishioners of the Lavra are currently fighting for Ukraine at the front.

According to Klyment, a number of important personnel decisions were made at a closed meeting of the Synod of the UOC-MP on 23 November.

Quote: “The Synod has dismissed and discharged from office several bishops who had improperly performed their pastoral duties in relation to the dioceses entrusted to them during the time these territories were under Russian occupation.

The members of the Synod issued an appeal, in which they once again emphasised that the Ukrainian Orthodox Church condemns the war launched by the Russian Federation against Ukraine and consistently advocates for the preservation of the sovereignty, independence and territorial integrity of Ukraine.

The appeal emphasises that many bishops and priests who did not evacuate, but stayed with their parishioners during the period of Russian occupation, often risked their lives, helping the citizens of Ukraine who found themselves under occupation, to survive in subhuman conditions. Therefore, it is unacceptable to make groundless and unproven accusations against them.”

On 22 November, the Security Service of Ukraine and the police carried out counterintelligence measures on the…