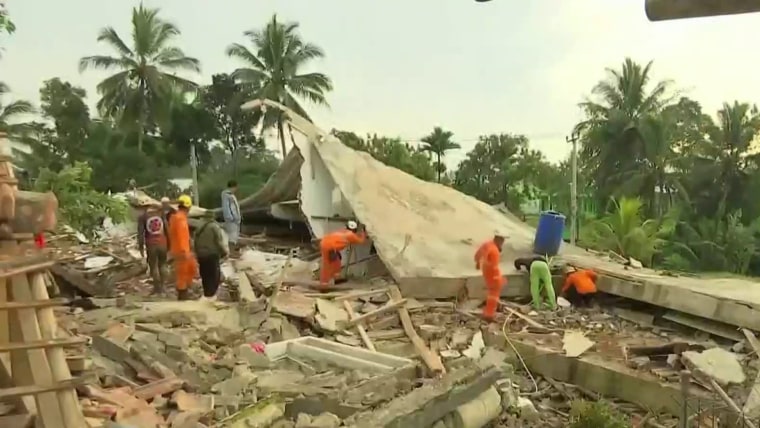 CIANJUR, Indonesia — On the fourth day of an increasingly urgent search, Indonesian rescuers narrowed their work Thursday to a landslide where dozens are believed trapped after an earthquake that killed at least 271 people, more than a third of them children.

A day earlier, searchers rescued a 6-year-old boy who was trapped for two days under the rubble of his collapsed house. Suharyanto, chief of the National Disaster Mitigation Agency, said he was found alive next to the dead body of his grandmother.

It was the most deadly earthquake in Indonesia since a 2018 earthquake and tsunami in Sulawesi killed about 4,340 people.

Many of the more than 1,000 rescue personnel are using backhoe loaders, sniffer dogs and life detectors — as well as jackhammers and bare hands — to speed up the search in the worst-hit area of Cijendil village, where a landslide set off by Monday’s quake left tons of mud, rocks and trees in Cugenang sub-district.

Indonesian President Joko Widodo visited Cianjur on Thursday and said that their focus will be on one location where 39 are still missing.

“The search process will be our priority for now. Concentrate there. And this afternoon we will concentrate on this one point for search,” Widodo said.

“Steep conditions and it is still raining and there are still aftershocks. The soil is unstable, so you need to be careful,” he said. “But the Minister of Public Works has ordered his staff, who are used to doing cut and fill. I think this can be done soon.”

He added there are also obstacles in distributing supplies to the injured and displaced who are spread out and hard to reach.

“We hope all victims can be found soon,” Henri Alfiandi, chief of the National Search and Rescue Agency, said Thursday.

More than 2,000 people were injured in the quake that displaced at least 61,000 people to evacuation centers and other shelters after at least 56,000 houses were damaged. The National Disaster Mitigation Agency has said 171 public facilities were destroyed, including 31 schools.

Suharyanto, chief of the National Disaster Mitigation Agency, said 100 of the 271 confirmed deaths were children.

The 5.6 magnitude of Monday’s earthquake would not typically be expected to cause serious damage. But the quake was shallow and shook a densely populated area that lacks earthquake-resistant infrastructure. Weak aftershocks continued until Thursday morning.