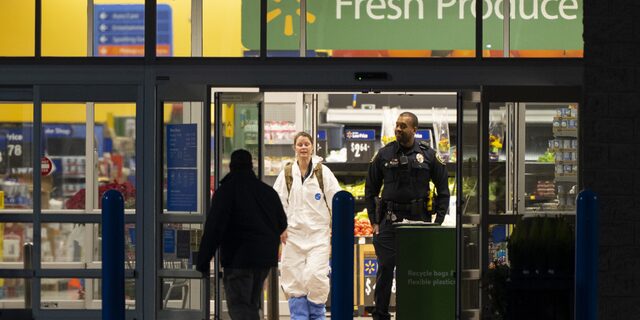 Andre Bing, the Walmart employee who is believed to have opened fire Tuesday night on his coworkers in a Chesapeake, Virginia, store, reportedly left a manifesto on his phone.

A law enforcement source told local outlet WAVY 10 that Bing had carried a written manifesto on his phone. Fox News has yet to confirm the report with the Chesapeake Police Department.

The content of the document has not been released to the public.

A law enforcement investigator wears a protective covering as they work the scene of a mass shooting at a Walmart in Chesapeake, Virginia. Five adults and one teenage boy were killed, authorities said.
(AP/Alex Brandon)

Chesapeake city officials identified Bing as the gunman believed to have killed six people before police say he turned his pistol on himself.

Bing was an “overnight team lead and he’s been employed with us since 2010,” the company said Wednesday in a statement to Fox News Digital. The 31-year-old from Chesapeake was “armed with one handgun and had multiple magazines,” according to the city.

WALMART SAYS IT IS ‘SHOCKED’ BY CHESAPEAKE STORE SHOOTING

“While details of the tragic incident in our Chesapeake, Virginia, store are still emerging, authorities have confirmed multiple fatalities. We are focused on doing everything we can to support our associates and their families at this time,” Walmart said in a statement. “The alleged shooter has been identified as Andre Bing. We can confirm that he was a Walmart associate.”

Law enforcement, including the FBI, work the scene of a mass shooting at a Walmart on Nov. 23, in Chesapeake, Virginia.
(AP/Alex Brandon)

Employee Briana Tyler said the overnight stock team of about 15 or 20 people had just gathered in the break room to go over the morning plan. She said the meeting was about to start when her team leader said, “All right, guys, we have a light night ahead of us,” when her manager turned around and opened fire on the staff.

“It is by the grace of God that a bullet missed me,” Tyler said. “I saw the smoke leaving the gun, and I literally watched bodies drop. It was crazy.”

The chaos ended after police say the shooter, who was armed with a pistol, turned the weapon on himself. He is believed to have died from a self-inflicted gunshot wound.

Andre Bing, 31, is believed to have killed six people inside the Virginia Walmart,…