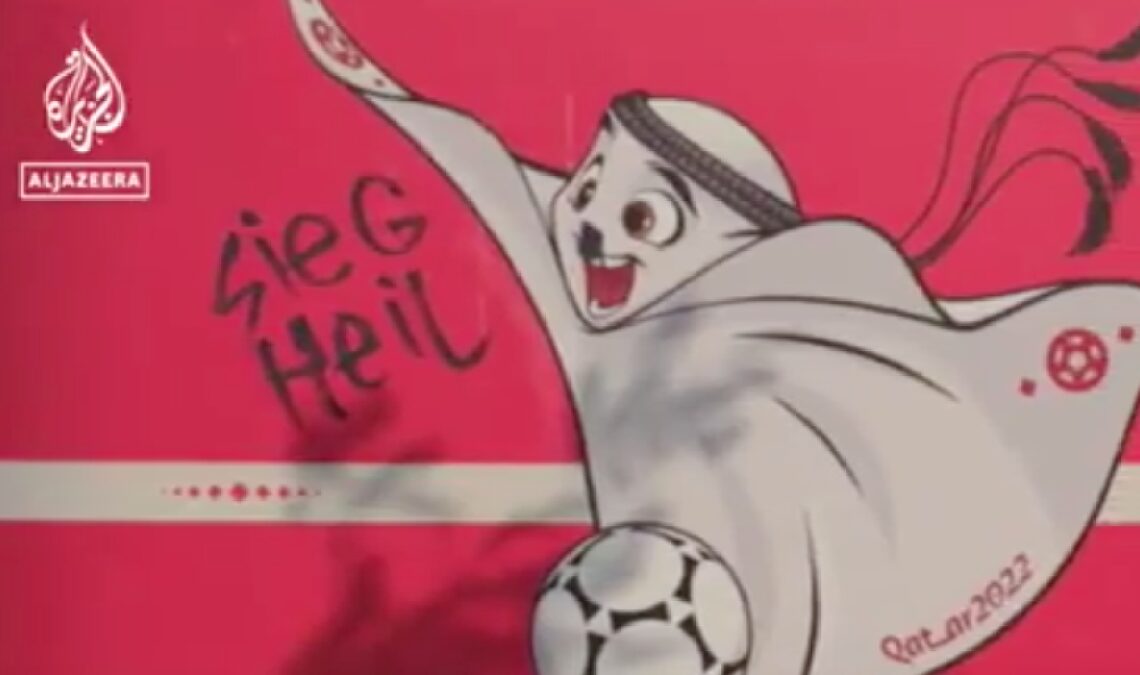 In less than a minute, the video “reports” that three Ukrainians were detained after they painted a “Hitler moustache” on La’eeb, the 2022 World Cup’s mascot, and scribbled a Nazi salute next to it.

It also alleges that the Ukrainians purportedly destroyed 10 more posters in the vicinity of the Al Bayt Stadium in Doha, where the championship is taking place, before they were detained.

The video first appeared on Tuesday, November 22 and has been widely shared on social media, with some posts retweeted thousands of times.

To a beginner’s eye, the video looks real.

The style is similar to that of Al Jazeera social media clips, but the stadium’s name is spelled incorrectly – El Beit, instead of Al Bayt, and some of the language is not in the style of Al Jazeera’s journalism. One sentence reads: “At the time of their arrest, the Ukrainians made no resistance.” Such a phrase would not have escaped our copy editors.

Mnar Adley, editor of MintPressNews, a left-wing website, was among those who sent out a tweet with the video.

“Ukrainians were arrested in Qatar after they drew swastikas on football posters,” she wrote, alongside the video, to her following of 23,300 users.

#Ukrainian football fans were detained in #Doha #Qatar . They were spreading nazi symbols on the walls. They’ve been in custody so fare.#Qatar2022 #QatarWorldCup2022 #QatarWordCup2022 #Ukraine #UkraineWar #UkraineRussiaWar️ pic.twitter.com/HqWemouOyI

User @LogKa11, who has almost 14,000 followers, wrote “Nazi Ukrainians were arrested in Qatar after they drew swastikas on football posters”, as they shared the video. The post was retweeted more than 800 times on their feed, which shares pro-Russian content.

Let’s look at it closely to understand how and why the video has been designed and spread:

What does the video show – and not show?