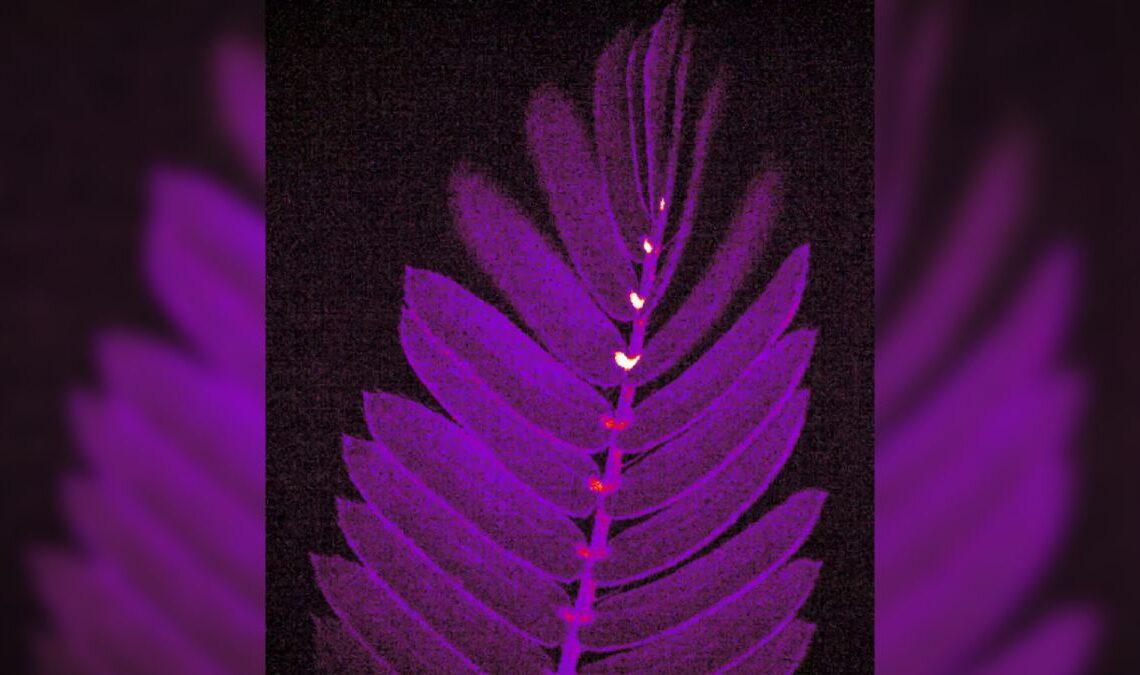 Flashes of light shoot along the spines of fluorescent-stained leaves from the “touch-me-not” plant as they fold up in striking new videos. The flashy footage has revealed how the plant closes up in a matter of seconds, despite lacking nerves and muscles.

The shameplant (Mimosa pudica), also known as the touch-me-not, is renowned for its ability to quickly curl up its leaves when they are touched by retracting the leaf’s elongated, pine-like leaflets back toward its central spine. However, until now, the exact mechanisms behind this animal-like reflex have largely remained a mystery.

In a new study published Nov. 14 in the journal Nature Communications (opens in new tab), a team of researchers created genetically-altered, fluorescent shameplants and then filmed their leaves as they curled up. The resulting footage revealed that both chemical and electrical signals moved in unison through the leaves and triggered the leaflets to be pulled back.

Related: Plant leaves spark with electricity during thunderstorms — and that could be altering our air quality in unpredictable ways

“Plants possess various communication systems that are normally hidden from view,” study co-author Masatsugu Toyota (opens in new tab), a plant physiologist at Saitama University in Japan, said in a statement (opens in new tab). The best way to figure out how they work is to make them visible, he added.

In the new videos, parts of the leaves light up as action potentials — the electrical depolarizations of cell membranes — move through them. This is similar to how nerves work in animals but without specialized cells to channel the electrical energy, the signals travel more slowly through the plant’s tissue.

Until now, researchers had suspected that either action potentials were the main signaling mechanism used by shameplants, but the videos reveal for the first time exactly how the signals are created. As cells depolarize, they release calcium ions that react with the fluorescent markers placed in mutated…