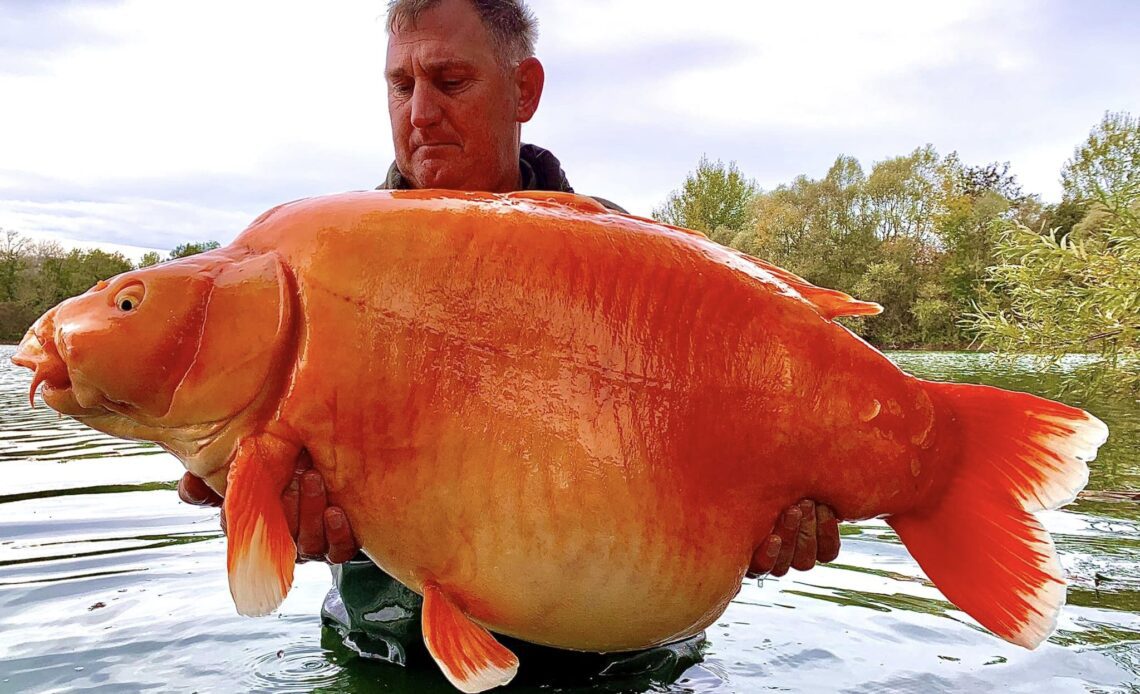 A British angler has caught one of the world’s largest goldfish on record after an epic battle with the fish in a French lake.

The fisher landed the 67-pound (30 kilograms) fish, nicknamed The Carrot, after a 25-minute tug-of-war at Bluewater Lakes in France’s northeast Champagne province. A hybrid between a leather carp and koi, the goldfish was released into the lake 20 years ago, after which it ballooned in size, becoming one of the largest of its kind to ever be caught.

“With normal fish you struggle to see them if they’re just under the surface, but The Carrot is obviously bright orange so you can’t miss it,” Andy Hackett, the man who caught the fish, told the BBC (opens in new tab). “It’s a much sought-after fish, not many people have caught it, it’s quite elusive.”

After catching The Carrot, Hackett released the fish back into the lake so that other anglers would have a chance to catch it, the BBC reported.

Related: Do goldfish really have a 3-second memory?

If they are kept in home aquariums, goldfish (Carassius auratus) and smaller carp tend to grow no larger than 2 inches (5 centimeters) long. But when released into the wild, the teensy fish can grow into giants; in 2013, one supersize goldfish captured in Lake Tahoe measured nearly 1.5 feet (46 cm) long and weighed over 4 pounds (2 kg).

Upon announcing the day’s catch, Hackett was told “You’re gonna need a bigger bowl,” he recalled.

Despite their propensity to die in captivity, goldfish are as tough as they come in the wild — having proven capable of living 25 years and surviving for up to five months without any oxygen (opens in new tab). This is because the fish evolved to live in ponds that freeze over in the winter, meaning that in low-oxygen environments their bodies shift from aerobic respiration to converting carbohydrates into alcohol, which they release through their gills. When these traits are coupled with rapid reproductive rates, goldfish are quickly able to dominate new habitats at the cost of native species.

Goldfish tenacity has already caused problems in lakes in which multiple fish, often dumped by people who once kept them as pets, are released at once. In 2021, officials in the Minnesota city of Burnsville released an official statement pleading with residents to refrain from releasing goldfish into the waters of the city’s Lake Keller. The once-tiny fish had begun growing to enormous sizes, and were wreaking havoc on the lake’s delicate ecological webs.