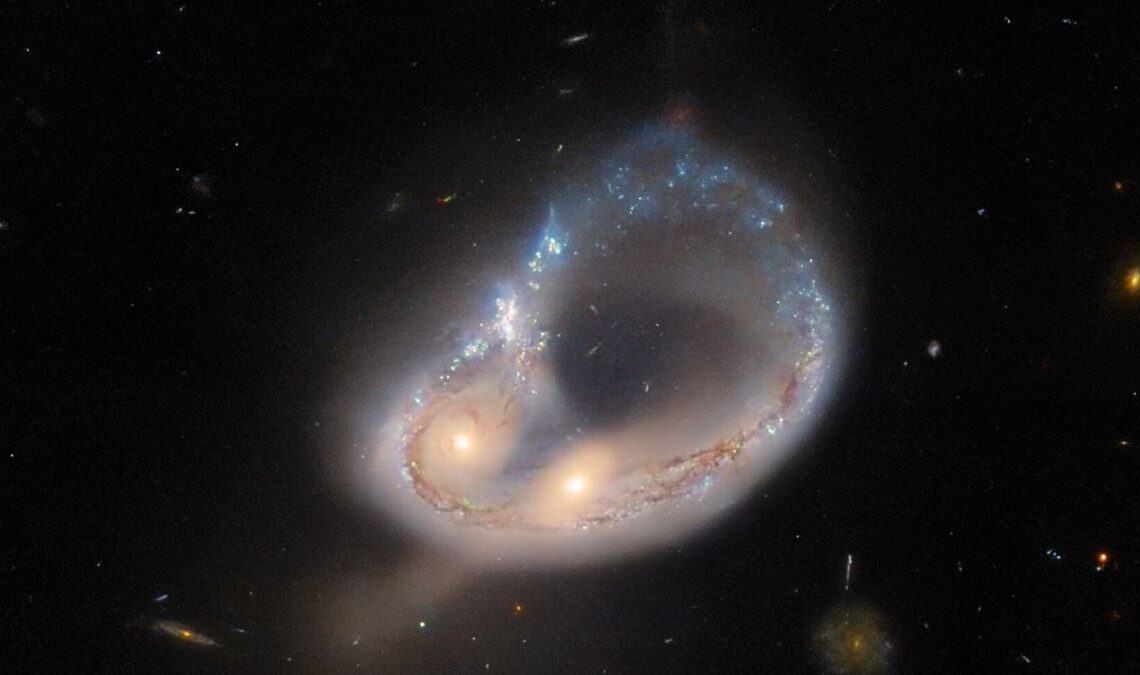 The Hubble space telescope has snapped a stunning shot of a pair of colliding galaxies that have been warped into a colossal, glowing ring of stars by the intense gravitational forces between them.

The entwined galaxies, collectively known as Arp-Madore 417-391, lie around 670 million light-years away from Earth in the constellation Eridanus, which is visible in the Southern Hemisphere.

The new image was captured by Hubble’s Advanced Camera for Surveys (ACS), which is specially designed to seek out galaxies from the early universe, and was released Nov. 21 by the European Space Agency (ESA).

“The two galaxies have been distorted by gravity and twisted into a colossal ring, leaving the cores of the two galaxies nestled side by side,” ESA representatives wrote online (opens in new tab).

The cosmic collision is the latest in the Arp-Madore Catalog of Southern Peculiar Galaxies and Associations, an archive of more than 6,000 images of unusual galaxies that have been spotted in the southern skies.

In June 2019, Hubble spotted another galaxy merger, known as Arp-Madore 2026-424, which produced a similar but imperfect ring structure that resembled a ghost’s face.

Ring structures in galaxy mergers are extremely rare and only form when the two colliding galaxies smash into one another head-on rather than slowly being pulled together by gravity, according to NASA (opens in new tab).

The rings are only temporary, lasting for around 100 million years. After that, the stars gradually get pulled back into their parent galaxies, which eventually merge into a singler new galaxy between 1 billion to 2 billion years later, according to NASA.

There are around 100 known galaxy merger rings, but very few form in such a perfect circle like the newly snapped Arp-Madore 417-391. The new ring’s symmetrical shape is likely because the colliding…