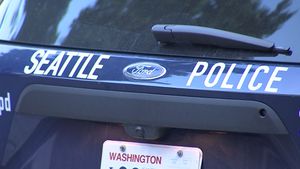 A man was arrested after another man was stabbed in the back in the South Park neighborhood of Seattle, according to the Seattle Police Department.

About 5:45 a.m., officers responded to a report of a stabbing where they found a man with a stab wound to his back.

Medics with the Seattle Fire Department responded and transported the 33-year-old man to Harborview Medical Center.

After officers recovered the knife, a 45-year-old man was arrested for assault and booked into the King County Jail.