No uniforms, no guns: How police officers in Longueuil, Que., are confronting bias 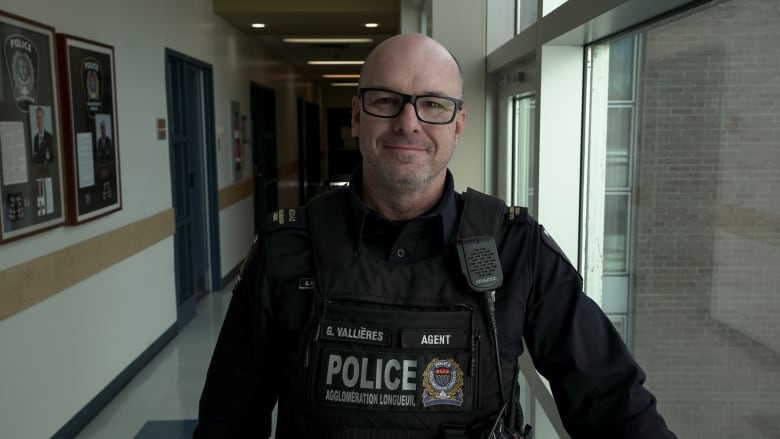 The call blares through the constant radio static. It’s urgent. A man is standing by a busy road and says he wants to kill himself.

Patrol officers turn on their siren and expertly weave through busy traffic as they race to the scene. It’s another mental health-care crisis and it happens all the time.

Officer Ghyslain Vallières is following behind in another cruiser. A former community-based officer, Vallières is now a spokesperson for the Longueuil police force on Montreal’s South Shore.

The officers on patrol tonight have only been on the job for six months and will end up spending the rest of their shift convincing the man to go to hospital and escorting him there. Vallières said the reality of policing is not what many new graduates expect.

The ‘”dream that you had of your career as a police officer, at 20 years old … you think that you will fight the criminality, you think you will run behind a thief,” he said. “Well, that’s not the reality. The reality is there’s a lot of crisis. There’s a lot of people who have a lot of vulnerability.”

Because of that, he said, the Longueuil force is “trying to have a program like immersion for them to know what’s happening because it’s going to be a part of their job for the future.”

In Longueuil, the future of policing is already here. From suicide calls to checking in on people who haven’t shown up at work for days, the majority of 911 calls have nothing to do with crime.

Most of the calls are nuanced and complex and officers may not be equipped to deal with them or may be responding in ways that only escalate a crisis. It’s why the force created what it says is the only immersion program of its kind in the world where police are taken off patrol to step into the lives of people they’re supposed to serve and protect.

Vallières said immersion is designed to “destabilize” rookies and veterans alike by stripping them of their uniforms and guns and more importantly, the sense of power that comes with them.

“It’s hard sometimes to be human, to be connected to the person who is feeling something, so that’s why we said: ‘OK, first of all, connect with that person.Try to put yourself in their shoes.'”