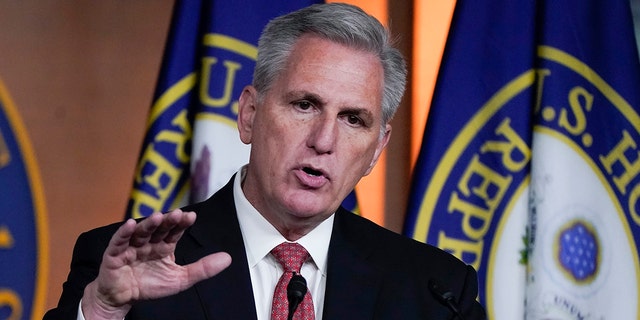 But it’s far from clear that McCarthy can attain the votes to become Speaker. McCarthy has spent the past few days making not-so-subtle promises which may help him become Speaker. McCarthy demanded that Homeland Security Secretary Alejandro Mayorkas resign or face potential impeachment during a trip to the southern border. McCarthy also promised that “next year, Republicans will start every day of Congress with prayer and the Pledge of Allegiance. No exceptions.”

Republicans can adopt any rule they want as it pertains to House operations when the GOP claims control in January. But the House routinely begins each session with the prayer and pledge anyway. In fact, House rule XIV dictates “the daily order of business…shall be as follows: First. Prayer by the Chaplain. Second. Reading and Approval of the Journal, unless postponed under clause 8 of rule XX. Third: The pledge of Allegiance to the Flag.”

Of course, Republicans could always alter the rule to ensure that the “Approval of the Journal” doesn’t interrupt the prayer and pledge. But that’s pretty minimal.

This underscores that McCarthy is doing all he can to command enough votes to become Speaker. Making promises to bounce Reps. Ilhan Omar, D-Minn., Adam Schiff, D-Calif., and Eric Swalwell, D-Calif., from committees. Hinting at impeachment to sate the appetite of the right over the border. Appealing to religious conservatives.

It may work. But so far, the math isn’t in favor of McCarthy when the floor vote hits in January. Reps. Ralph Norman, R-S.C., Matt Gaetz, R-Fla., Matt Rosendale, R-Mont., Andy Biggs, R-Ariz., and Bob Good, R-Va., are unlikely to support McCarthy. That could be enough votes right there to sink McCarthy’s bid for the gavel.

But if not McCarthy, who?

It wasn’t that long ago that McCarthy was supposed to succeed former House Speaker John Boehner, R-Ohio as Speaker. And then former Speaker Paul Ryan, R-Wisc., took the job –…