Russia needs a week to prepare another missile strike on Ukraine 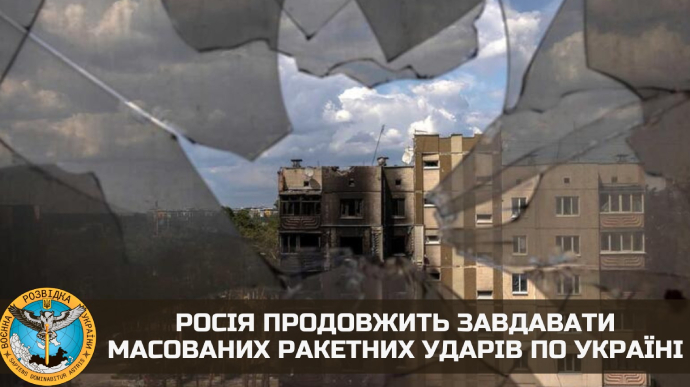 Defence Intelligence at the Ukrainian Ministry of Defence has predicted that the Russians will keep carrying out large missile strikes on Ukraine, and it will take about a week to prepare for the next attack.

Quote: “They are trying to break us, plunge us into darkness and cold during the war and force us to negotiate on the aggressor’s terms. This is not going to happen; we understand that the frequency of massive missile attacks on Ukraine is about a week. That is, they need a week to prepare for the next attack of this scale.”

Details: Yusov has pointed out that Russia’s stocks of high-precision weapons have been depleted, but the aggressor still has a lot of low-precision missiles.

At the same time, according to the Defence Intelligence representative, the aggressor is not really concerned about precision.

Quote: “In many cases, an error in a range of one kilometre is the conventional “norm”, and there are strikes not even on infrastructure facilities but on residential buildings or hospitals. This is a sign of the sloppiness of the Russian missile operators and Russia’s regime in general…

The Russians mostly have rockets for their S-300 anti-aircraft missile systems. This means that there is a threat to cities near the line of contact, first of all Zaporizhzhia, Kharkiv, Mykolaiv, and Kherson. Unfortunately, S-300s can reach those cities.

Ukraine is working on protecting civilian infrastructure and the civilian population, but we understand that the enemy is serious, armed, and massive despite its clumsiness. Therefore, unfortunately, the missile terror may still continue.”

Previously: As the sources of Ukrainska Pravda state, Russia’s missile stock will be enough for three more large attacks. Ukrainian Minister of Defence, Oleksii Reznikov, has posted a graph of data on the use of various types of missiles by Russian invaders.

Nevertheless, the Air Force of Ukraine has explained that the Russians keep producing more modern types of missiles.

On 23 November, Russia carried out another large missile attack on Ukraine’s energy infrastructure. Air defence units shot down 51 out of 70 cruise missiles and 5 kamikaze drones. As a result of the missile attack, most Ukrainian oblasts have been…