Russia to Punish Promoting LGBTQ Rights With Up to $82K Fine, Jail Time 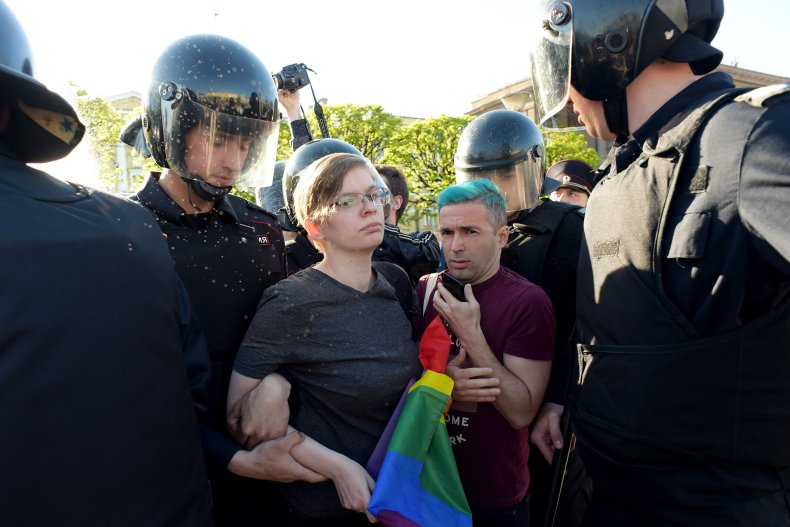 Russia is again cracking down on its LGBTQ community, with lawmakers moving to further restrict activities seen as promoting gay rights.

On Thursday, lawmakers in the Russian parliament approved a bill that widens the restrictions on “LGBT propaganda” that already exist among minors. It also bans the “demonstration” of LGBTQ behavior, prohibits Russians from publicly suggesting such lifestyles are “normal” and outlaws all advertising, media, books and motion pictures that are seen as promoting such “propaganda.”

Violations of the ban would be punishable by fines ranging from 100,000 to 2 million rubles ($1,660 to $33,000). Non-residents could be expelled from Russia and some cases could result in a 15-day detention before the expulsion.

The bill is an expansion of the “gay propaganda” law that was adopted by the Kremlin nearly a decade ago, prohibiting the promotion of LGBTQ lifestyles aimed at children. The new legislation will head to the upper house of Parliament before being sent to President Vladimir Putin‘s desk, where he will sign the bill into law.

Last month, Alexander Khinstein, one of the bill’s architects, called LGBTQ lifestyles “an element of hybrid warfare and in this hybrid warfare we must protect our values, our society and our children.”

Anti-LGBTQ ideas are widely held by Russian officials, who have made same-sex marriages illegal and often talk of a desire for “traditional values” to be promoted in Russia.

In July, the commander of Chechen forces fighting in Ukraine praised Russia’s invasion as a “holy war” against the LGBTQ community.

“We are not under the flags of the LGBT and as long as [Russian President Vladimir Putin is] alive, we won’t be under those flags,” Apti Alaudinov said on state-run television.

Although homosexuality was decriminalized in Russia nearly 20 years ago, European watchdog ILGA-Europe ranks the country 46th out of 49 European nations for LGBTQ inclusion.