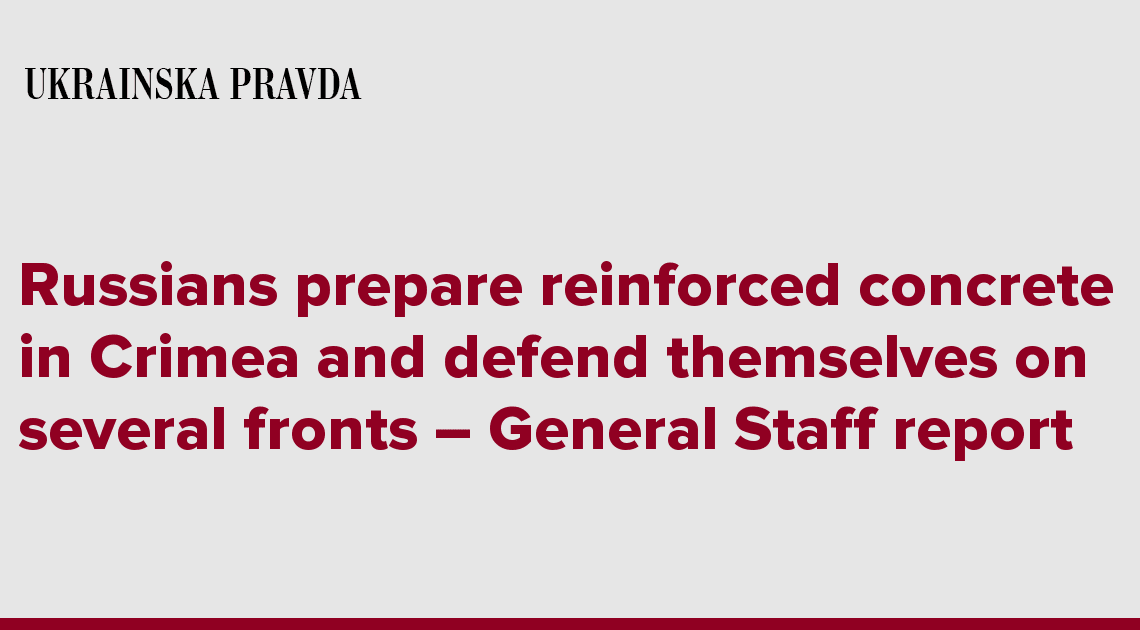 The 274th day of Russia’s full-scale invasion of Ukraine has begun and over the course of the past 24 hours, Ukrainian defenders have repelled a number of attacks by Russian troops. Meanwhile, the occupiers in Crimea are actively manufacturing reinforced concrete structures.

Source: General Staff of the Armed Forces of Ukraine on Facebook, information as of 06:00 on 24 November

Quote: “Over the course of the past 24 hours, Ukrainian defence force units have repelled the occupiers’ attacks near the settlements of Andriivka, Bakhmut, Klishchiivka, Krasnohorivka, Marinka, Ozarianivka, Opytne and Yakovlivka in Donetsk Oblast.”

Details: On the Bakhmut and Avdiivka fronts, the Russians are conducting offensive operations, but are defending on the Kupiansk and Lyman fronts, as well as on the Novopavlivka and Zaporizhzhia fronts, and on the Kryvyi Rih and Kherson fronts, they are improving the fortification of their positions.

On the Volyn and Polissia fronts, there is no significant change in the situation, and there are no signs of the formation of Russian offensive groups.

On the Sivershchyna front, the invaders fired tubed and rocket artillery at areas in and around the settlements of Hai and Khrinivka (Chernihiv Oblast) and Basivka, Seredyna Buda and Yasna Poliana (Sumy Oblast).

On the Slobozhanshchyna front, Russian forces continue to hold troops in the border areas of Russia’s Belgorod Oblast in order to conduct demonstrative actions. Periodically, there are attacks on the positions of the Ukrainian troops as well as on the settlements of Bolohivka, Veterynarne, Hlyboke, Dvorichne, Izbytske, Krasne, Kudiivka, Ohirtseve and Strilecha (Kharkiv Oblast).

On the Kupiansk and Lyman fronts, the aggressor is on the defensive. The Russian forces are carrying out attacks using tanks, mortars and tubed artillery, in particular in the areas of the settlements of Berestove, Vilshana, Vyshneve, Kyslivka, Krokhmalne, Tabaivka (Kharkiv Oblast); Makiivka, Novoselivske, Stelmakhivka and Ploshchanka (Luhansk Oblast) and Terny, Torske and Yampolivka (Donetsk Oblast).

On the Bakhmut and Avdiivka fronts, Russians focus their main efforts on conducting offensive operations. They fired from tanks and the entire spectrum of artillery at areas in and around the settlements of Avdiivka, Andriivka, Bakhmut, Bakhmutske, Berkhivka, Verkhnokamianske, Vyimka, Vodiane, Hryhorivka, Klishchiivka,…