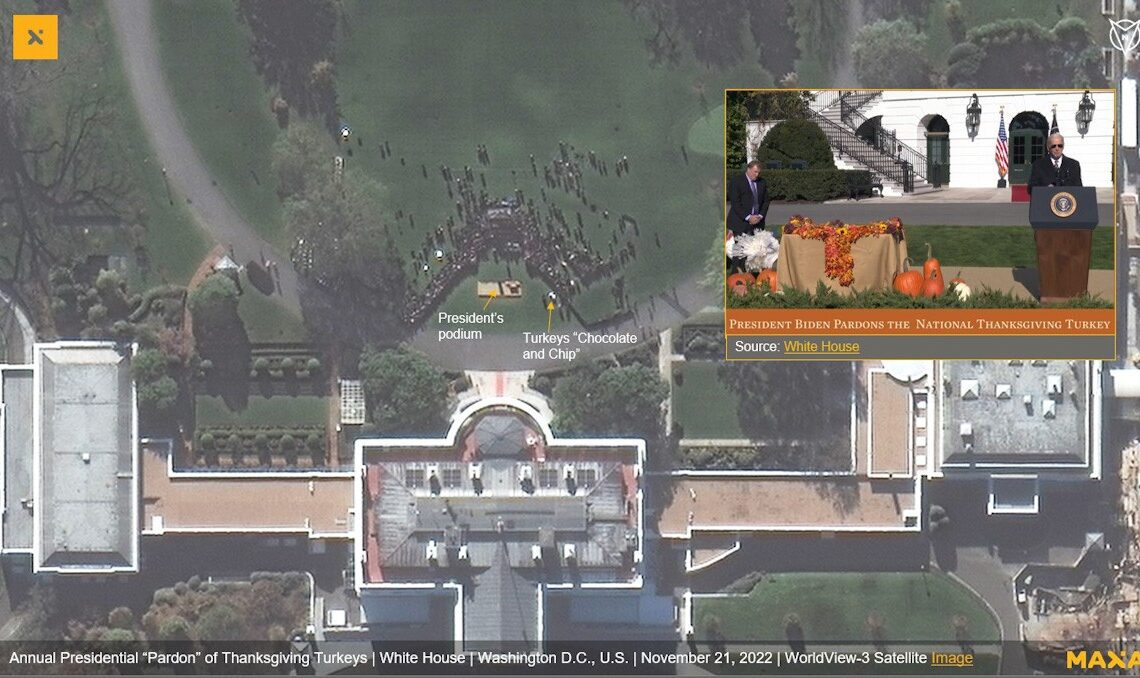 Hundreds of spectators can be seen crowding to watch a White House turkey “pardoning” in fresh satellite imagery from space.

The curious ceremony on Monday (Nov. 21) was visible from space in an image produced by a Maxar satellite, called WorldView-3, and it even had a NASA connection.

In a speech during the event, U.S. President Joe Biden joked that instead of naming one of the turkeys “Chip”, he might have preferred “CHIPS” — the act that in part, gave NASA its funding for fiscal year 2023 and extended U.S. International Space Station operations to 2030.

Biden preferred the name of the other turkey he pardoned, called “Chocolate”, because it’s his favorite ice cream flavor, he added. “We could have named them ‘CHIPS’ and ‘Science’, but — anyway,” he said (opens in new tab) of the turkeys to crowd laughter.

#Satelliteimagery from today of the annual White House ceremony with the presidential pardoning of the national turkeys Chocolate and Chip. #WorldView-3 pic.twitter.com/4bOTEUb4bxNovember 21, 2022

The annual “pardoning” of turkeys sent to the White House appears to date back to a merciful gesture by Abraham Lincoln in 1863, the White House states (opens in new tab). The ceremonial measure was enforced (so to speak) only sporadically until the Reagan administration, however.

The first pardoned turkey on record was affectionately named “Jack” by Lincoln’s eight-year-old son Tad, according to Smithsonian Magazine (opens in new tab). (Tad had a love for animals; when goats Nanko and Nannie were donated to the White House, the lad is said to have hitched them sled-style to a chair, driving them into a packed East Room reception hosted by First Lady Mary Todd, the magazine adds.)

In photos: Animals in space

The annual Thanksgiving ceremony has also made its way to popular culture. Turkeys “Eric” and “Troy,” for example, were featured on a famous 2000 episode of “The West Wing” under a fictional pardon contest: The winner would live in a zoo, while the “runner-up gets eaten,” in the words of one of the characters. (“If the Oscars were like that, I’d watch,” quips fictional Democratic president Jed Bartlet, played by Martin Sheen.)

Bartlet, complaining that the powers of the presidency give no “judicial jurisdiction over birds” and a second ceremonial pardon would cement his reputation as being “soft on turkeys,” eventually “drafts” runner-up Troy into military service…