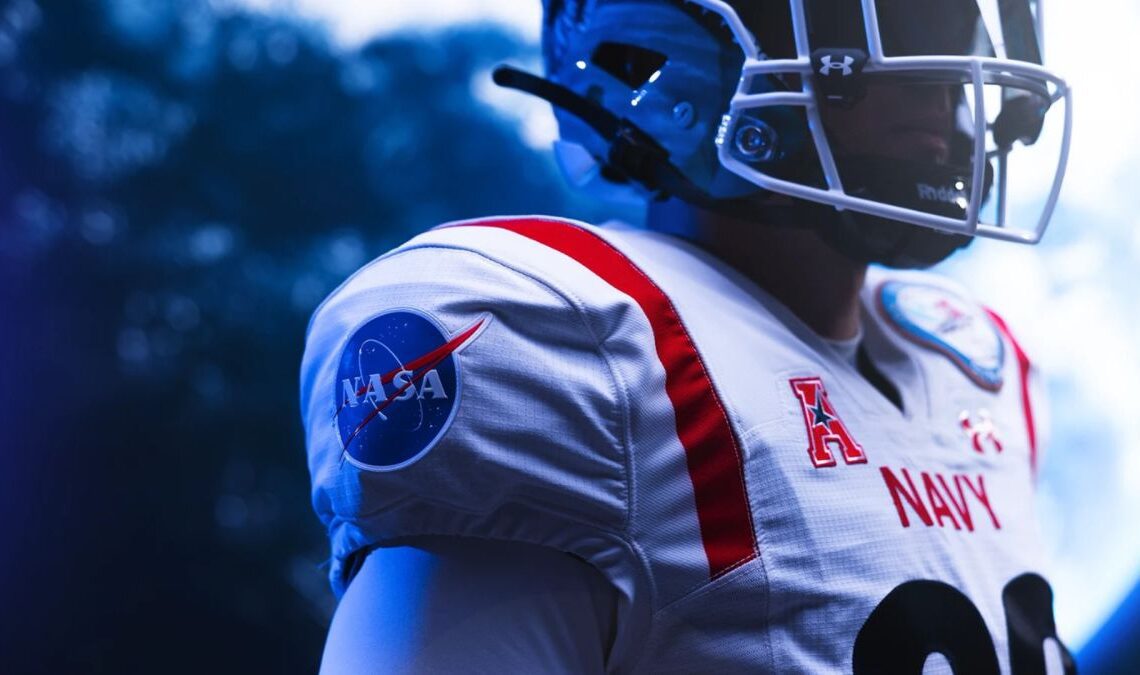 America’s rich spaceflight history is taking to the gridiron.

The Naval Academy revealed the uniforms (opens in new tab) on Monday (Nov. 21), showing off designs that feature iconic NASA imagery such as the agency’s famous “worm” and “meatball” logos, the official astronaut pin and a spacesuit-clad astronaut performing a spacewalk.

In a statement (opens in new tab) describing the design of the uniforms and the American spaceflight history they honor, the Naval Academy notes the long history of graduates turning to spaceflight. “Fifty-four United States Naval Academy graduates have gone on to become astronauts, the most of any institution,” the statement reads, adding that “the first Naval Academy graduate to become an astronaut was Alan Shepard (’45), who was the first American in space (May 5, 1961) and was one of NASA’s first seven astronauts.”

The Naval Academy’s NASA-inspired uniforms are white with a red stripe, in a nod to one of the color schemes on NASA spacewalk suits. The typeface (font) on the uniform is Helvetica, the same one NASA has used for decades in its official logos and graphics, including on the space shuttle.

The uniforms’ pants and gloves both feature the historic astronaut pin; silver pins are given when astronauts complete basic training, while gold pins are given upon completion of a spaceflight mission.

One side of Naval Academy’s NASA-inspired helmets feature the iconic image of astronaut Bruce McCandless appearing to float alone above Earth as he performed a spacewalk during the STS-41-B mission in 1984 while wearing the Manned Maneuvering Unit propulsion system.

The helmet’s other side, meanwhile, displays NASA’s “worm” logo in red and white above an image of the moon. The uniform is finished off by a patch of the USS Enterprise, the U.S. Navy’s first nuclear-powered aircraft carrier which helped track Friendship 7, the first American orbital spaceflight.