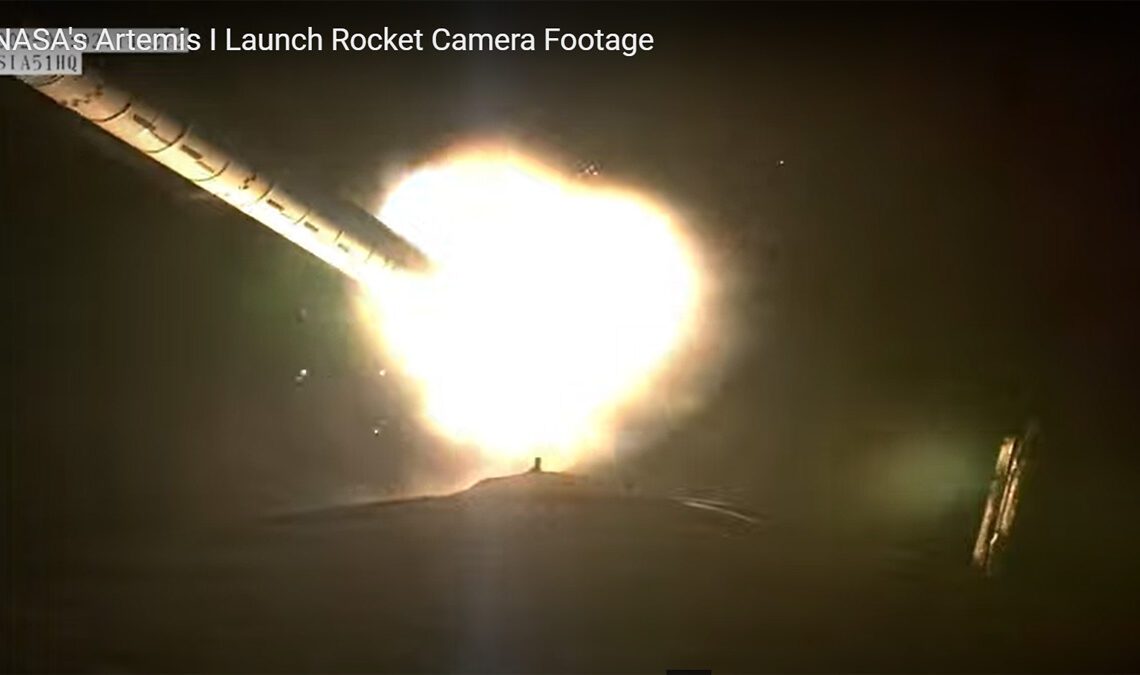 NASA has released a video taken by a camera on board the Space Launch System moon rocket showing a fiery separation of the rocket’s two strap-on boosters shortly after lift-off.

The camera, attached to the core stage of the 322-foot-tall (100 meters) rocket, filmed the two solid-fuel boosters, which helped the rocket off the ground during its milestone launch on Nov. 16, fall off, flaming. The separation occurred two minutes and 11 seconds after the rocket rose from a Kennedy Space Center launch pad into the night at 1:47 a.m. EST (0647 GMT).

The successful lift-off came after several delays due to technical problems and bad weather in Florida less than a week after the rocket survived a lashing by sustained winds of 75 mph (120 km/h) during tropical storm Nicole.

The successful lift-off marked the beginning of the Artemis 1 mission, which is testing NASA’s Orion spaceship during an uncrewed debut lunar round trip before it can be allowed to carry astronauts. The mission has so far proceeded without any major hiccups. On Wednesday (Nov. 23), NASA briefly lost contact with Orion for unknown reasons, but the problem was resolved after 47 minutes.

The two boosters were the first parts of the rocket to separate after the lift-off. Only a minute later, SLS dropped off the fairing protecting Orion during launch and its launch abort system. The rocket’s giant core stage fell off eight minutes after liftoff, leaving only the upper stage attached to Orion, which at that point was able to spread its solar wings. Nearly an hour after lift-off, Orion discarded the upper stage and set off on its milestone lunar trip on its own.

Since then, the capsule performed three burns using its main engine to place itself on a trajectory to enter a high orbit around Earth’s natural satellite on Saturday (Nov. 25). On its way, the capsule made a close pass above the lunar surface, looking at the moon from an altitude of only 81.1 miles (130 kilometers).

On Tuesday (Nov. 26), Orion will surpass the record for the greatest distance from Earth achieved by a human-rated spacecraft. The record of  248,655 miles (400,171 km) was set by the Apollo 13 mission in 1970 during a rescue operation that helped the crew return home after an onboard explosion made its original lunar-landing mission impossible. On Monday (Nov. 26), Orion will set a new record at 268,554 miles (432,194 km) from Earth. The capsule will return to Earth on…