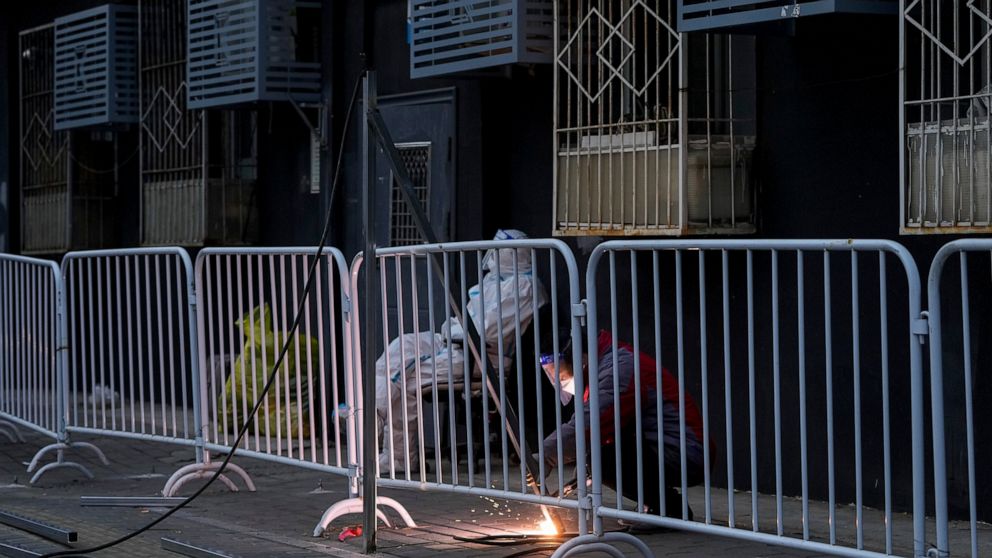 Uncertainty and scattered, unconfirmed reports of lockdowns in at least some Beijing districts have fueled demand for food and other supplies, something not seen in the city for months.

Unusually large numbers of shoppers in the city’s northern suburbs left shelves bare in markets, but customers were relatively few in the center of the city of 21 million, where supplies remained abundant.

Daily cases of COVID-19 across the country are hitting records, with 32,695 reported Friday. Of those, 1,860 were in Beijing, the majority of them asymptomatic.

Most residents of the city have already been advised not to leave their compounds, some of which are being fenced in. At entrances, workers clad head to toe in white hazmat suits stop unauthorized people and make sure residents show a recent negative COVID-19 test result on their cellphone health apps to gain entry.

Several university campuses have been closed off and students in lower grades have been shifted to online classes.

Meanwhile, some of Beijing’s grocery delivery services have reached capacity.

An increase in demand combined with a worker shortage left some customers unable to book same-day delivery slots on Friday for food and supplies from popular online grocery services such as Alibaba’s Freshippo and Meituan Maicai.

Online, some Chinese users said some delivery personnel were unable to work because their compounds were locked down. The reports could not be verified.

At a Friday afternoon news conference, city government spokesperson Xu Hejian said it was necessary “to strengthen the management and service guarantee” of quarantine centers and field hospitals where people who test positive for COVID-19 or have been in close contact with an infected person are taken by police.

Authorities must “further accelerate” their construction and “coordinate the allocation of space, facilities, materials, personnel and other resources,” Xu said.

Officials have in recent days…