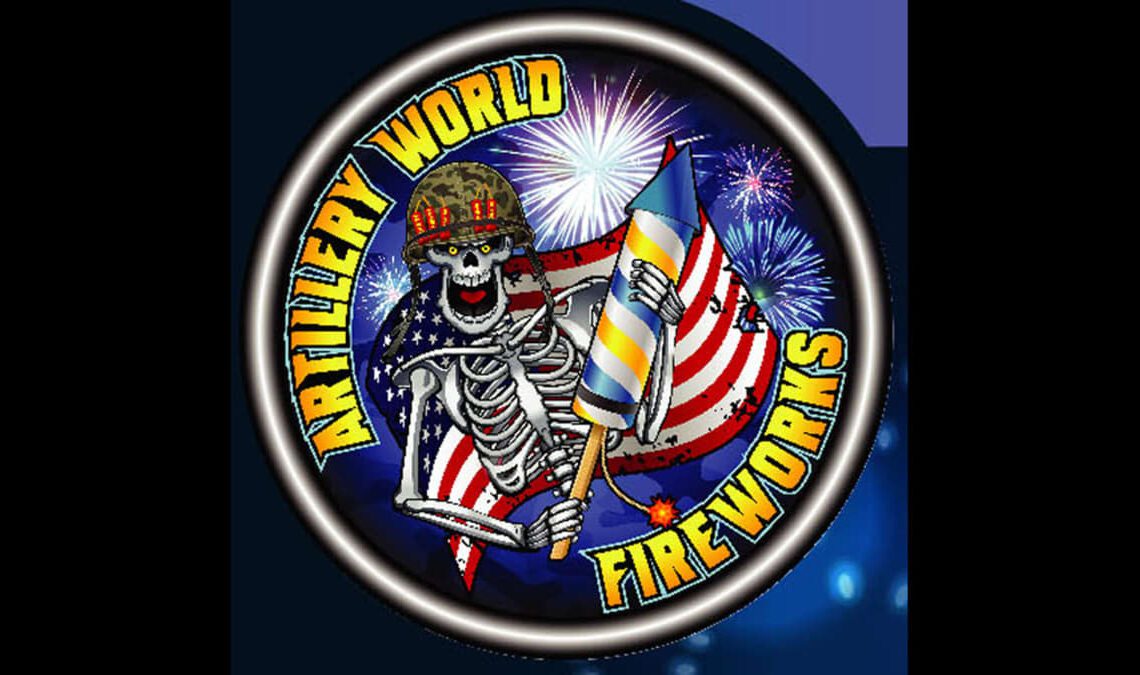 The American Motors Corporation was formed when the Nash-Kelvinator Corporation and the Hudson Motor Car Company merged in 1954. New cars with AMC badges didn’t show up until the 1966 model year, however; prior to that, the old marque names were kept alive for a while. Cars with Nash badges survived until 1957, while Rambler (formerly a Nash model name) became the main AMC brand through 1967 (though the 1930s Nash “Weather Eye” feature name went on AMC dashboards well into the 1970s). The Hudson name got the axe at the same time as Nash, but one AMC machine managed to get two marque names just before that: the Hudson Rambler Custom Cross-Country station wagon. Here’s one of those rare machines, spotted a few months ago in a Wyoming self-service yard just over the border from Colorado.

It’s hard to miss Cheyenne Auto and Metal when you’re heading up I-25 from Colorado, because the yard is located very close to the fireworks store with this memorable logo. 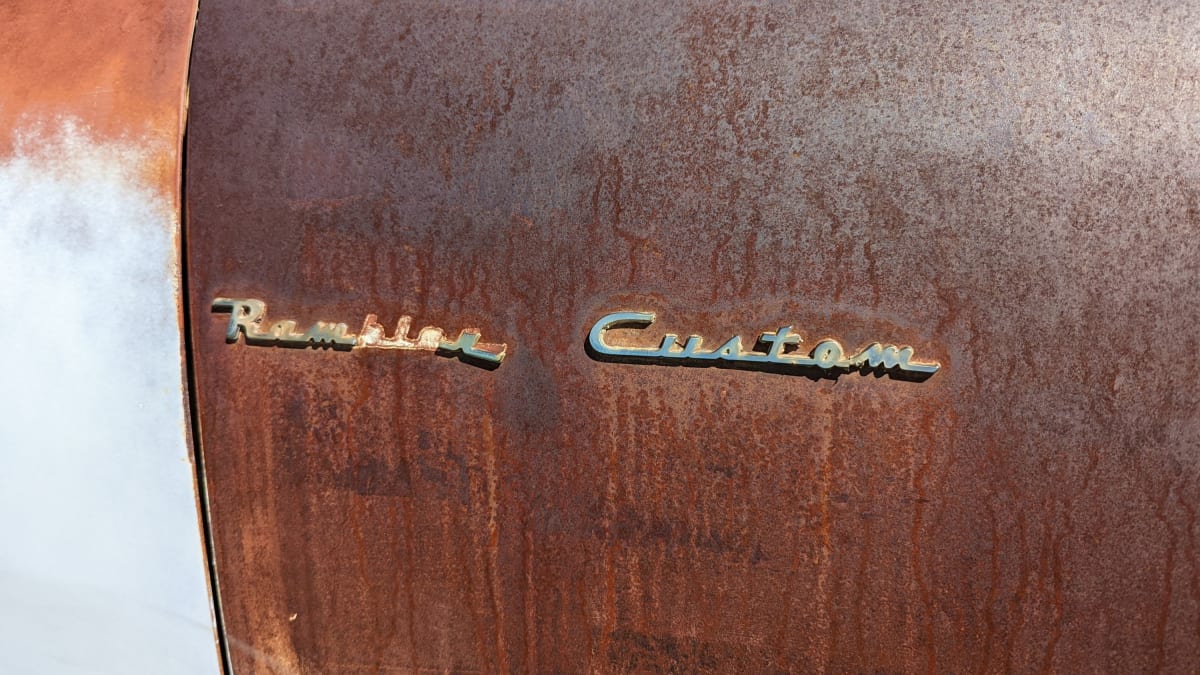 The only visible difference between the Rambler Custom Cross Country and the Hudson Rambler Cross Country was the grille badge. Otherwise, the two were identical. 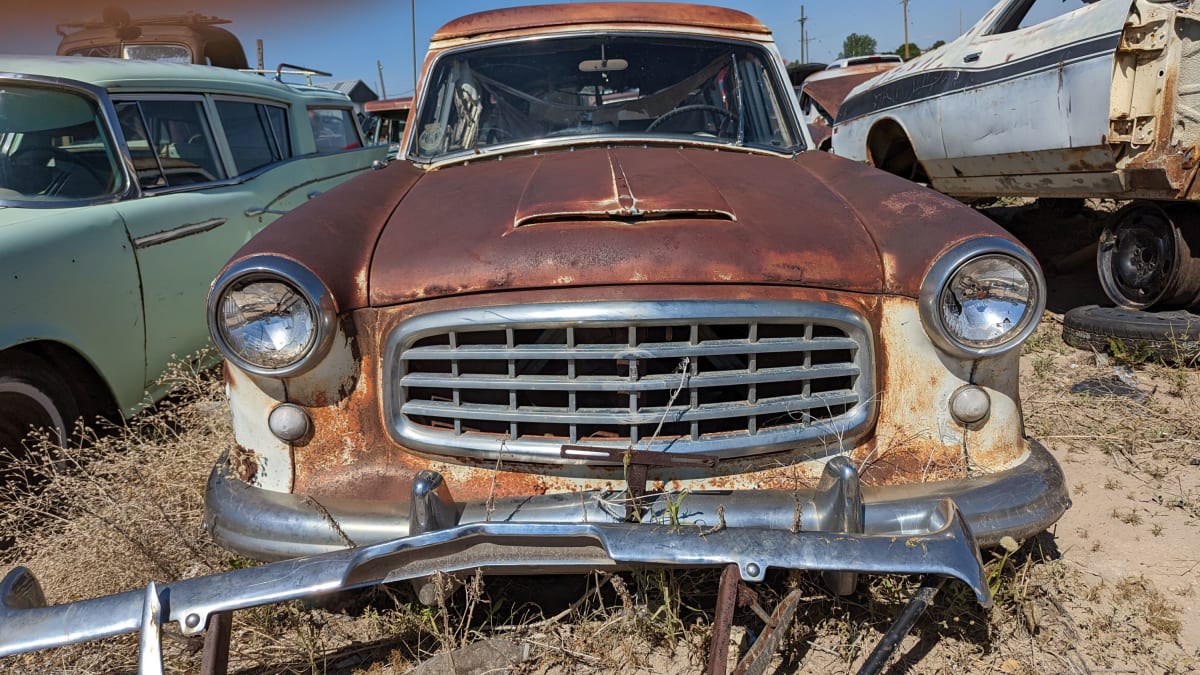 You can see the shadow of that Hudson badge on this car’s grille, but it’s long gone. The Hudson-badged version of this car was available for just the 1955 and 1956 model years. Some of the paint schemes got pretty wild. 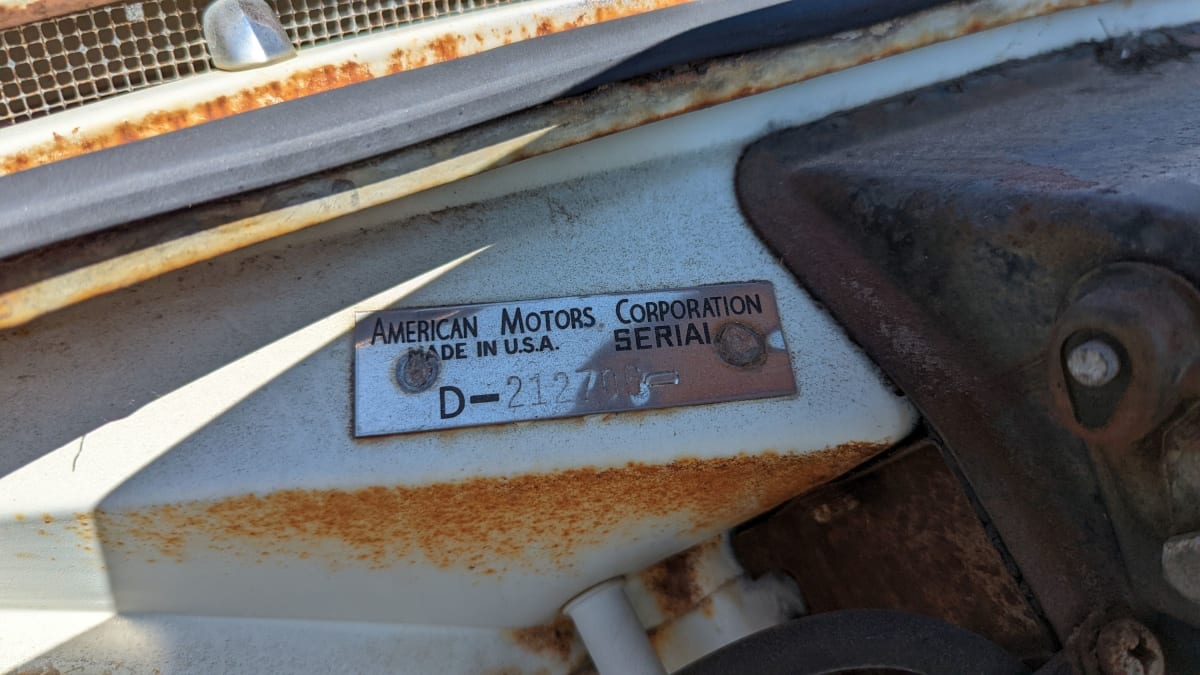 The only clue that allowed me to determine that this car was sold new as a Hudson was the number on this firewall tag. My guess is that Hudson fanatics don’t consider this Nash to be one of their own, just as many Packard aficionados turn their backs on the rebadged-and-fish-faced Studebakers of 1958. 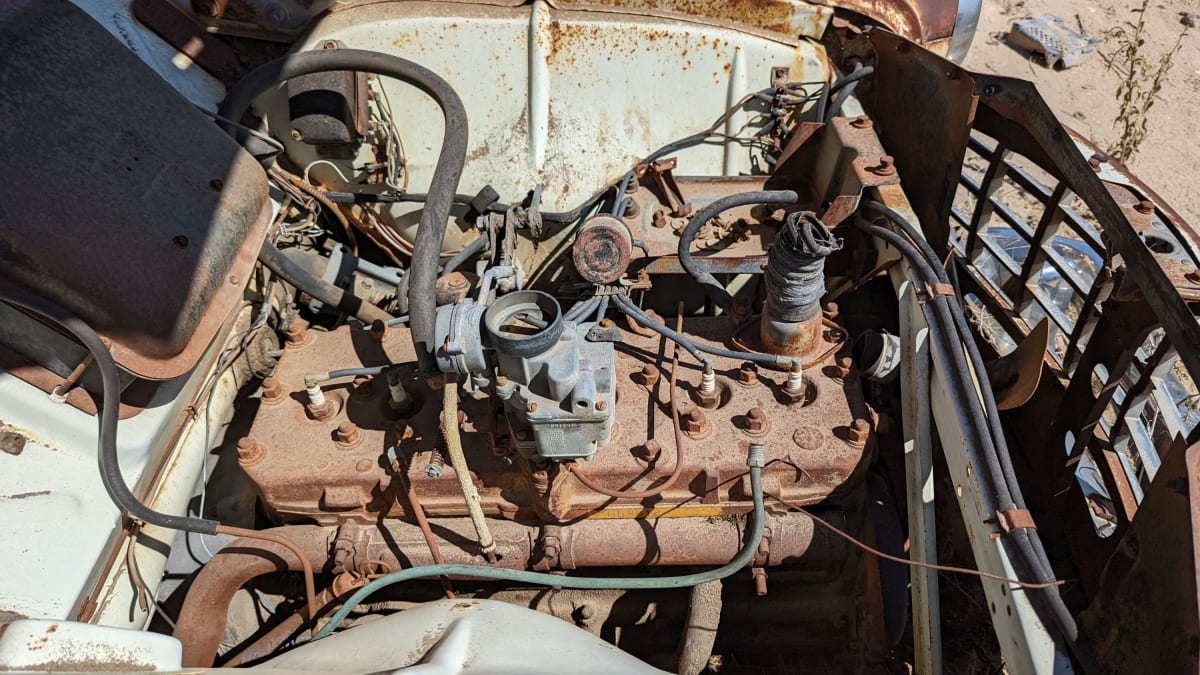 This engine is a straight-six flathead of 196 cubic inches’ (3.2 liters) displacement, known as the Nash “Flying Scot.” It was rated at 90 horsepower in 1955. This engine went on to a long career with American Motors, available in flathead form through 1965. It’s not mechanically related to the later overhead-valve AMC straight-six, which was still being installed in new Jeeps as late as 2006, but I consider it the spiritual ancestor of the Jeep 4.0. 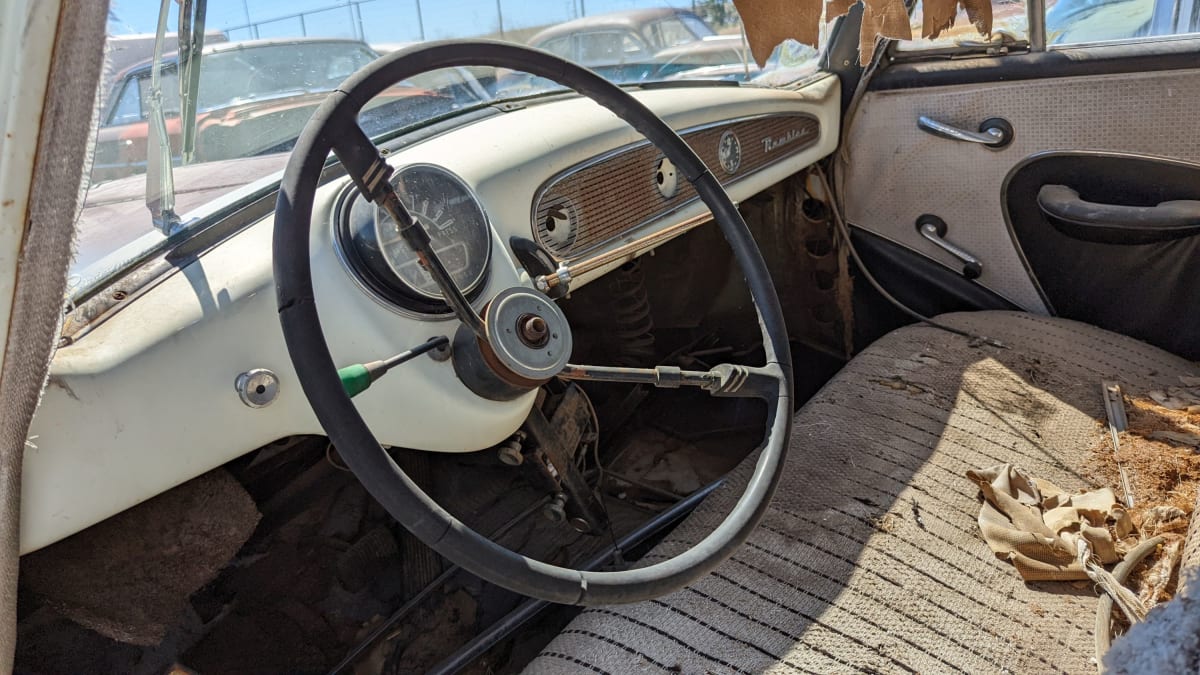 This car could be purchased with an automatic transmission (a GM-built two-speed Powerglide), but the base three-on-the-tree column-shift manual went into most ’55 Ramblers. 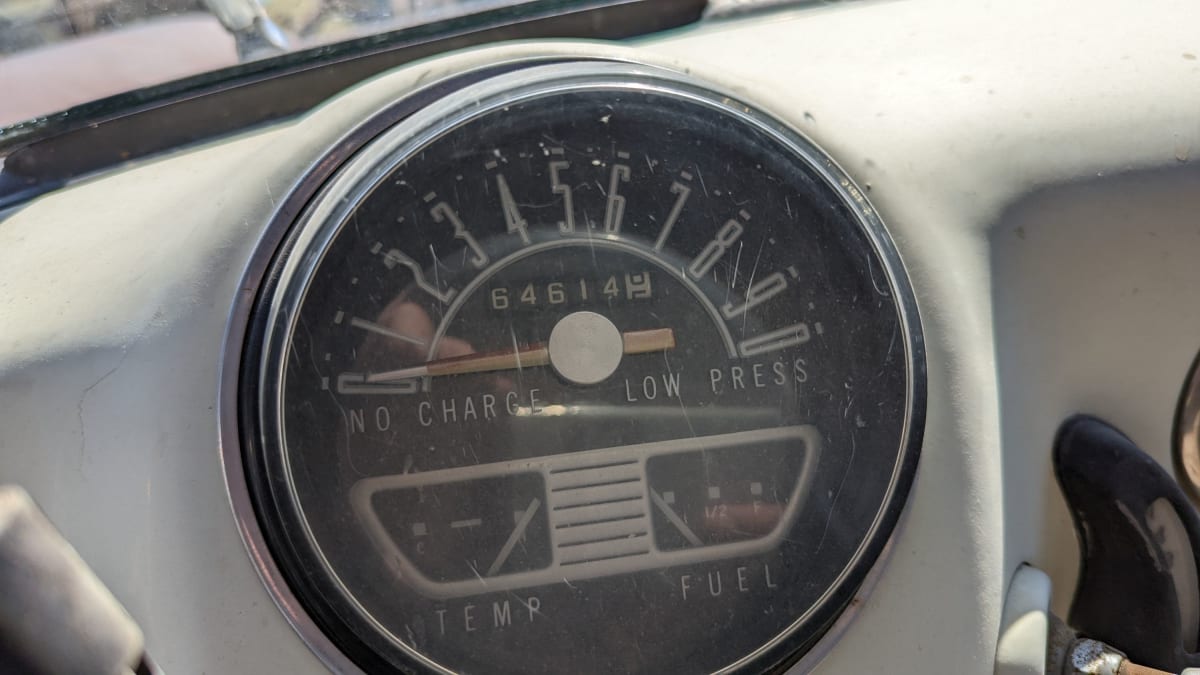 There’s just one gauge (not counting the clock), and it’s this well-designed all-in-one unit. 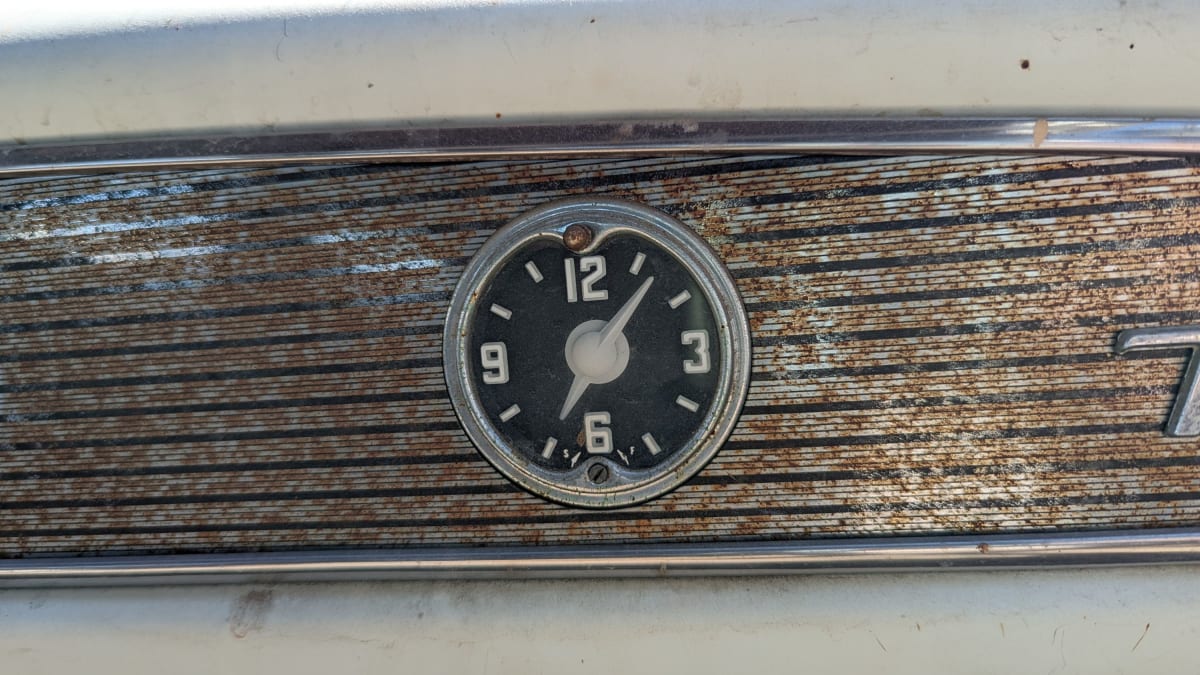 I thought about buying the dash clock for my collection, but mechanical car…