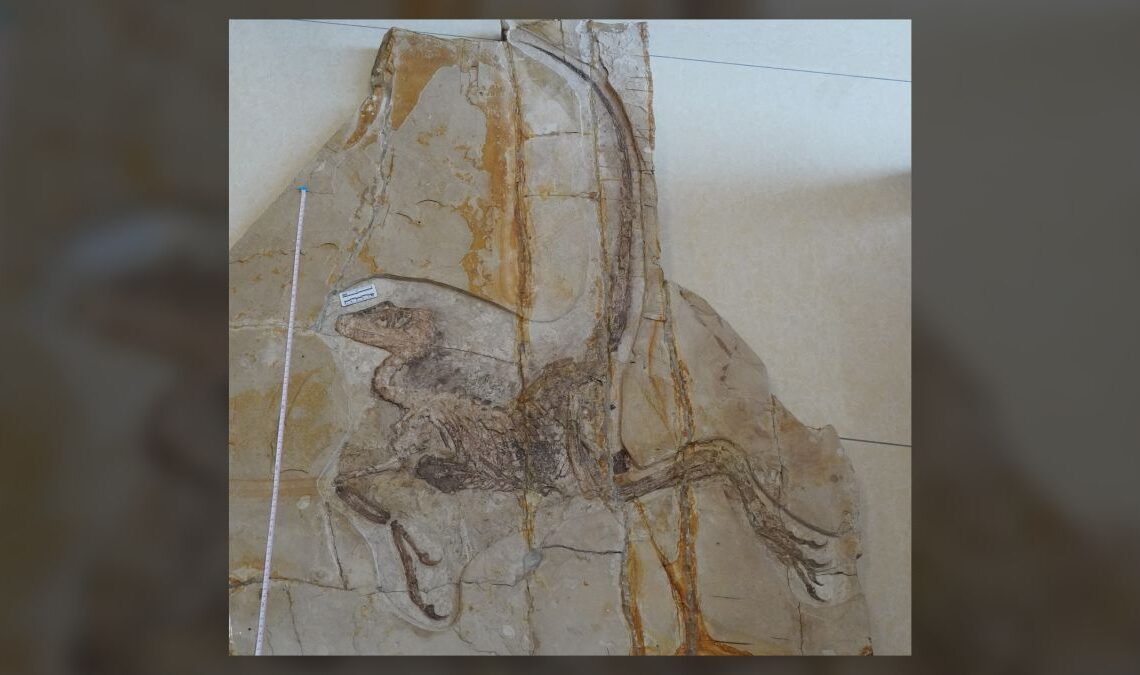 More than 100 million years ago, a fearsome birdlike dinosaur was swept into a lake and transformed into an exceptional fossil in what is now China, preserving one of the few intact gut remnants known from nonavian dinosaurs, a new study finds.

Paleontologists knew they had unearthed something special when they saw “a large bluish layer in the abdomen” of the fossilized beast, which belongs to the newly discovered species Daurlong wangi, as well as a dinosaur lineage called the dromaeosaurids, which includes the ancestors of modern birds. This bluish layer had “exceptional preservation” of the dinosaur’s gut, the researchers wrote in the study, published in the journal Scientific Reports (opens in new tab) on Nov. 19.

The finding offers valuable insight into both bird and dinosaur gut evolution, giving researchers a clearer window into dinnertime during the Lower Cretaceous (145 million to 100.5 million years ago).

Dromaeosaurids — also known as “raptors” — like D. wangi were mostly small, feathered and carnivorous. This group roamed the Earth from the mid-Jurassic period (about 167 million years ago) until the end of the Cretaceous period (66 million years ago). Their ranks included some of the most famous pop culture dinosaurs, such as Velociraptor and Deinonychus. But despite their popularity, little is known about their actual guts.

Soft tissue preservation is rare for any fossil, and intestinal preservation is particularly uncommon in dinosaurs. “This is the first case among dromaeosaurids,” study co-author Andrea Cau, an independent paleontologist based in Parma, Italy, told Live Science in an email.

Fossilization conditions have to be just right in order to prevent decay-causing bacteria from eating away delicate soft tissues, such as cartilage and organs. The newly described D. wangi specimen was likely buried very quickly under soft, fine sediments at the bottom of a body of water in what is now the Jehol Biota — an area known for well-preserved fossils in modern-day Inner Mongolia, an autonomous region in northern China. There, in the low-oxygen environment where aerobic bacteria could not survive, the dinosaur’s remains mineralized into fossils.

The researchers named the…