This Carnivorous Plant Has a Rain-Powered Trap 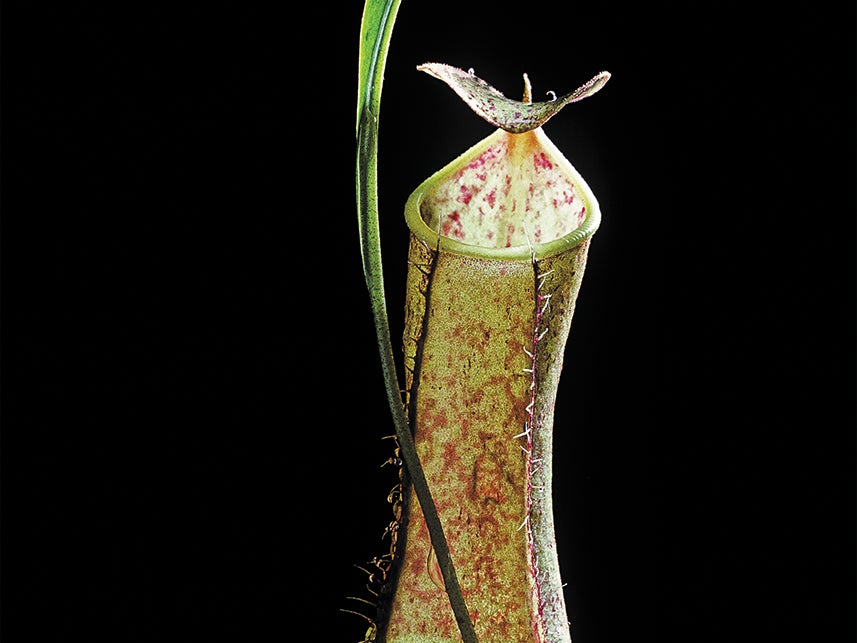 Carnivorous plants’ peculiar strategies for snagging live prey have long captured the public imagination. But even within this strange group, in which food-trapping mechanisms have evolved multiple times independently, some oddities stand out. For example, the visually striking pitcher plant Nepenthes gracilis, native to Southeast Asia, can harness falling rain’s energy to ambush animals. A new study in Biology Letters demonstrates how the structure of the plant’s pitcher component, itself a modified leaf, makes the unusual strategy work.

“This is the only case we know where a plant actually exploits [external energy] for a purpose,” says study co-author Ulrike Bauer, an evolutionary biologist and biomechanist at the University of Bristol in England. But how does this rain-powered trap function?

This species’ pitcher has a rigid, horizontal lid with an exposed underside that secretes nectar, luring insects to alight on it. When a raindrop strikes the lid’s top, the lid jolts downward and flings any unsuspecting visitor into digestive juices below. Bauer and study lead author Anne-Kristin Lenz, also at Bristol, used high-resolution x-ray scans to analyze cross sections of the pitchers when the lid is raised, lowered, and in a neutral position. Their results revealed a structural weak point, which the researchers called a torsional spring, in the pitcher’s neck: when a raindrop hits the lid, the weak spot buckles and forces the lid to flick downward, similar to a diving board. The weak point makes the pitcher’s body bend and snap back in a specific, consistent way, so the lid raises back up without bouncing too far—unlike a typical leaf’s chaotic oscillations when struck by rain. The researchers also found that a closely related pitcher plant, Nepenthes rafflesiana, lacked this mechanism.

“This is a really nice study that is comparing two species and getting back to this diversity among them,” says Pennsylvania State University entomologist Tanya Renner, who was not involved with the research. Although the rain-trap technique so far seems unique to N. gracilis, Renner hopes future work will examine more of the extensive diversity seen in carnivorous plants. “Personally,” she says, “I would look at more species.”