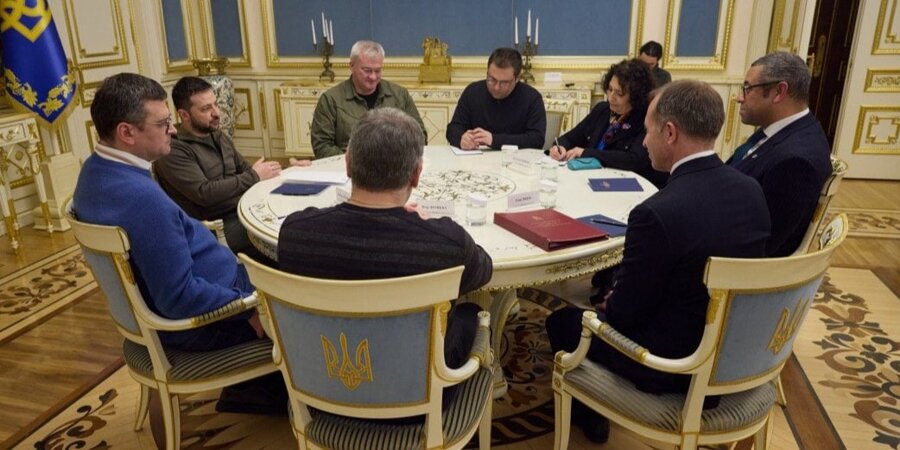 UK Foreign Secretary James Cleverly during his visit to the Ukrainian capital city of Kyiv announced both financial and military support for Ukraine, the UK Government said in a press release on Nov. 25.

The United Kingdom is also committing GBP 5 million ($6 million) for an Ukraine-led initiative to ship grain to countries at risk of famine.

In addition, the UK foreign secretary announced that the United Kingdom would provide Ukraine with an additional 35 emergency vehicles, including 24 ambulances and six armoured vehicles to support civilians caught in conflict.

Also, the United Kingdom will step up its support on demining, increasing its support from GBP 2 million ($2.4 million) this year, he said.

President Volodymyr Zelenskyy thanked the UK government for the military aid to Ukraine.

“Your visit is taking place amid a large-scale Russian missile attack, which left all of Ukraine without electricity and water,” Zelenskyy told Cleverly during their meeting in Kyiv.

“But that didn’t stop you. Thank you. We know that you are our friends and partners, and you are with us at this crucial time. Ukrainians will never forget this.”

The Ukrainian leader informed the UK minister about the consequences of Russian terrorist attacks on Ukraine’s critical civil infrastructure facilities and emphasized the importance of allocating funds for its restoration.

Zelenskyy also thanked the UK government for supporting the UN General Assembly’s resolution regarding a mechanism for collecting reparations from Russia for damage caused to Ukraine as a result of hostilities and missile strikes.

He also called on the United Kingdom to recognize the Holodomor of 1932-1933 in Ukraine as an act of genocide against the Ukrainian people.

“It’s important to do this right now, when Ukrainians are commemorating the 90th anniversary of the Holodomor,” Zelenskyy said.

The UK foreign secretary arrived in Ukraine almost a week after UK Prime Minister Rishi Sunak’s visit to the country.

The United Kingdom has systematically supported Ukraine since the beginning of Russia’s full-scale invasion of the country,…