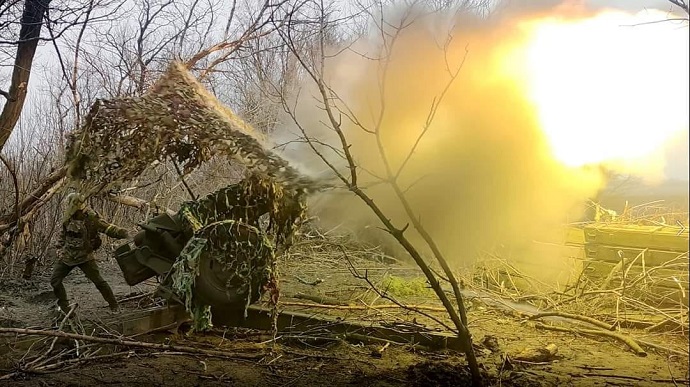 Russians are carrying out engineering equipment for the defence line in order to restrain the advance of Ukrainian troops on the Svatove and Lyman fronts.

Source: Evening report of the General Staff of the Armed Forces of Ukraine on Facebook, information as of 06:00, on 1 December

Details: Over the course of the past 24 hours, Ukraine’s defence forces have repelled Russian attacks in the vicinity of the settlements of Novoselivske, Stelmakhivka, Bilohorivka (Luhansk Oblast) and Bilohorivka, Yakovlivka, Bakhmut, Kurdiumivka, Krasnohorivka, Kamianka, Vodiane, Pervomaiske, Marinka (Donetsk Oblast).

At the same time, in order to prevent the advance of Ukrainian soldiers on the Svatove and Lyman fronts, Russians are carrying out engineering equipment for the defence line. Continues the movement of personnel, ammunition, and fuel and lubricants to equip and support new units and those that have suffered losses.

Russian forces have carried out 2 missile strikes on civilian targets in the vicinity of the settlement of Komyshuvakha in Zaporizhzhia Oblast; 41 airstrikes; and over 28 attacks using multiple-launch rocket systems (MLRS) on the positions of the Ukrainian Armed Forces and cities, towns and villages, in particular the city of Kherson.

On the Sivershchyna front, Russian forces deployed artillery to fire on areas in the vicinity of the settlements of Seredyna Buda, Bachivsk, Bilopillia, Budky and Krasnopillia in Sumy Oblast.

On the Bakhmut front, the Russians are continuing to focus their efforts on conducting an offensive. They fired from tanks, mortars, tubed and rocket artillery on areas in and around Verkhnokamianske, Spirne, Vyimka, Bilohorivka, Yakovlivka, Soledar, Bakhmutske, Bakhmut, Chasiv Yar, Opytne, Klishchiivka, Pivnichne, Zalizne and…