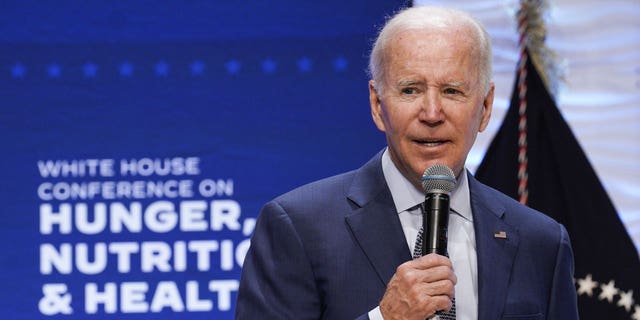 President Biden’s student loan debt relief program, which seeks to forgive hundreds of billions of dollars owed by tens of millions of borrowers, was handed another loss Wednesday as a federal appeals court denied his request to reinstate it, court documents show.

Biden’s student loan handout intends to forgive $10,000 in federal student loans per borrower and double that for PELL grant recipients, but it will remain on hold after the New Orleans-based 5th U.S. Circuit Court of Appeals rejected the Biden administration’s request to lift a stay put on the program by a lower district court in Texas.

In court documents filed Wednesday, the 3-judge panel unanimously chose not to override a decision by U.S. District Judge Mark Pittman on Nov. 10, which called the student loan handouts unlawful and temporarily suspended it.

US President Joe Biden speaks at the White House Conference On Hunger, Nutrition And Health in Washington, DC, US, on Wednesday, Sept. 28, 2022.
(Yuri Gripas/Sipa/Bloomberg via Getty Images)

The New Orleans court did choose, however, to expedite the case in its docket to the “next available” oral argument.

Notably, the 5th circuit court does not include any Biden appointees as it is composed of Judges Jennifer Elrod, James Graves and James C. Ho, appointees of former Presidents George W. Bush, Barrack Obama and Donald Trump, respectively.

Biden’s Department of Justice previously said it would request the U.S. Supreme Court to intervene if the 5th circuit denied the appeal.

The 5th circuit court case, brought by plaintiffs Myra Brown and Alexander Taylor, is one of two decisions preventing the U.S. Department of Education to move forward with the student loan program which is estimated to cost over $400 billion.

The Supreme Court in Washington, D.C. on October 31, 2022.
(Eric Lee for The Washington Post via Getty Images)

The case is separate from a legal challenge filed by several Republican-led states, which was last decided by the 8th Circuit Court.

The Biden administration claims the Higher Education Relief Opportunities for Students (HEROES) Act of 2003 gives it the authority to forgive $10,000 in student…