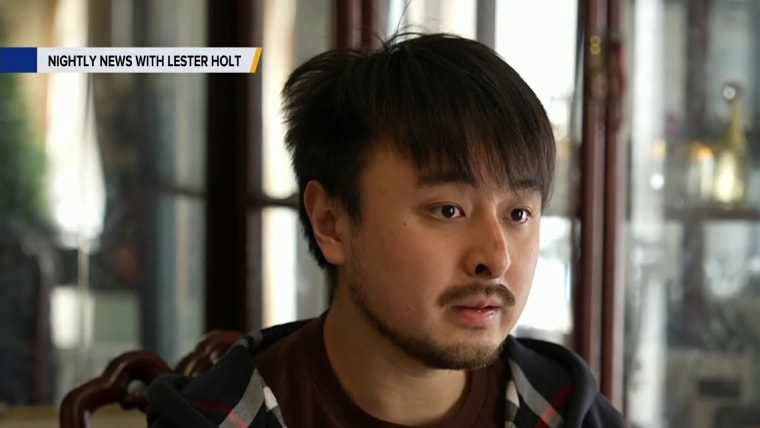 A video of a man disarming the suspected Monterey Park shooter shows him wrestling the gun away and potentially preventing more carnage at a second dance hall minutes after the gunman killed 11 people and wounded at least nine more at the first site.

Brandon Tsay, 26, has been hailed as a hero for disarming the Monterey Park shooter at a dance hall in Alhambra, California.

Harrowing video obtained exclusively by NBC News captured the men tussling in what appears to be an empty lobby in the dance hall.

An armed man, dressed in dark clothing and a hat, walks out of the picture and about 30 seconds later is seen struggling with Tsay as the two wrestle over the weapon. A shoving match ensues, and Tsay manages to take the gun away from the man.

The weapon has been described as a “semi-automatic assault pistol.”

The man then punches Tsay in his head while Tsay holds the weapon. The men continue to struggle before Tsay pushes the man off. The man continues to reach for the gun before he gives up and walks out of the room.

Tsay then points at the man and briefly moves out of the camera’s view before he returns, with the gun in his right hand and using a cellphone with the other.

The entire ordeal lasted about 4 minutes.

“There was a moment I actually froze up, because I was, I had the belief that I was gonna die, like my life was ending here, at that very moment,” Tsay told NBC News’ Lester Holt.

“But something amazing happened, a miracle actually. He started to try to prep his weapon so he could shoot everybody, but then it dawned on me that this was the moment to disarm him. I could do something here that could protect everybody and potentially save myself.”

Tsay said the gunman, who has since been identified as Huu Can Tran, 72 — came in and looked as if he were intent on further violence.

“When he came in, he said nothing,” he said. “His face was very stoic. His expressions were mostly in his eyes — looking around trying to find people, trying to scout the area for other people.”

The motive in Saturday night’s mass shooting is unclear. Law enforcement officials said Monday it appeared to be personal.

Multiple law enforcement sources familiar with the investigation said evidence gathered so far seems to rule out terrorism or a hate crime.