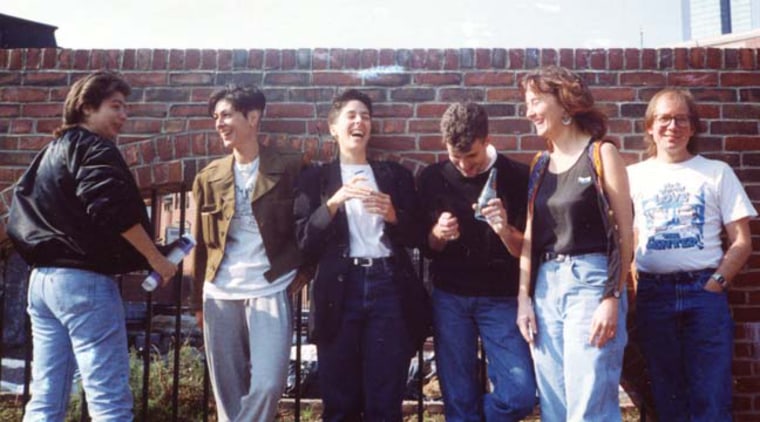 Decades before Iceman came out as gay or Robin first kissed his boyfriend, LGBTQ artists were creating queer comics in the 1970s and ‘80s. They weren’t working for Marvel or DC, though: They were making underground comic books, strips and zines out of their homes, DIY-style.

Premiering Monday on PBS, the documentary “No Straight Lines: The Rise of Queer Comics” shines a spotlight on some of these trailblazers, including Alison Bechdel (“Dykes to Watch Out For”), Howard Cruse (“Wendel,” “Stuck Rubber Baby”), Jennifer Camper (“Rude Girls and Dangerous Women”) and Rupert Kinnard (“B.B. and the Diva,” “Cathartic Comics”).

“No Straight Lines” also profiles Mary Wings, who is credited with publishing the first known queer comic book, “Come Out Comics,” in 1973.

“Mary was the first interview we did,” Hall said. “She created ‘Come Out Comix’ in the basement of a radical women’s karate cooperative in Oregon, making this thing on a photocopier and distributing it through mail order.”

The autobiographical book, completed in just a week, chronicles a young woman’s realization of her sexual identity and her first fumbling romantic relationship.

San Francisco, where Wings now lives, was home to many of the earliest LGBTQ comic books and strips — most of which were made by queer women.

After Wings’ book came Roberta Gregory’s “Dynamite Damsels” in 1975, a series of humorous vignettes about the lives of lesbian feminist activists, and then Lee Marrs’ “The Further Fattening Adventures of Pudge, Girl Blimp” in 1977, about a 17-year-old runaway who arrives in San Francisco looking to lose her virginity.

Trina Robbins, a straight ally, arrived in the Bay Area in 1970. Two years later she wrote “Sandy Comes Out,” considered the first comic strip about an out lesbian, in “Wimmen’s Comix” #1.

Hall curated an exhibit of early LGBTQ comics for San Francisco’s Cartoon Art Museum in 2006, then worked on the graphic anthology “No Straight Lines: Four Decades of Queer…