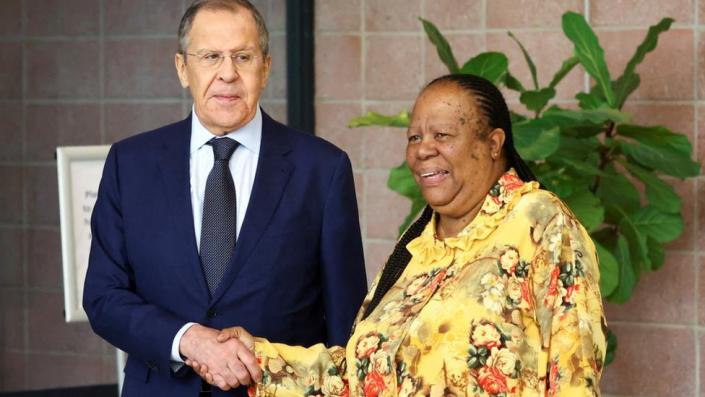 South Africa has defended its decision to hold a joint military exercise with Russia and China next month.

Foreign Minister Naledi Pandor condemned the “double-standard” which says some countries can perform such exercises but others are not.

The comments came at a press conference with Russian Foreign Minister Sergei Lavrov in Pretoria.

The event attracted a small group of protesters outside the venue, waiving Ukrainian flags.

Dr Pandor went on to slam the suggestion that South Africa cannot conduct the military exercises it wants to as an “abuse of international practice”.

“This is just a natural set of exercises that occur between countries,” she said.

Last week South Africa’s military announced it would hold joint naval drills with Russia and China off its coast next month.

But there has been some criticism that the exercise is not appropriate, given that it coincides with the first anniversary of Russia’s invasion of Ukraine.

Not much information has been given about the exercises, but the state-owned Tass news agency reports that a Russian warship armed with hypersonic cruise weapons will take part.

The Ministry of Defence has also defended the planned drills, saying that South Africa has in the past hosted similar exercises with France, the US and countries from the Western Nato military alliance.

The drills will run for 10 days from 17 February to 27 February in the port city of Durban, and Richards Bay.

The aim is to share operational skills and knowledge, the South African National Defence Force said.

Despite pressure from Western countries to condemn the Russian invasion, South Africa has remained neutral – to the disappointment of Ukraine.

Speaking at the conference, Mr Lavrov said he appreciated the “well balanced” and “considerate” approach of South Africa to the Ukraine war, which South Africa’s Dr Pandor said must be resolved diplomatically and through negotiation.

Officials in South Africa have repeatedly said they do not condone the invasion but will not be forced into choosing sides and are continuing to engage with both countries in a business-as-usual manner.

Critics of South Africa’s stance have accused the country of playing coy.

South Africa’s leaders have a connection to Russian dating back to the fight against white-minority rule, or apartheid,…