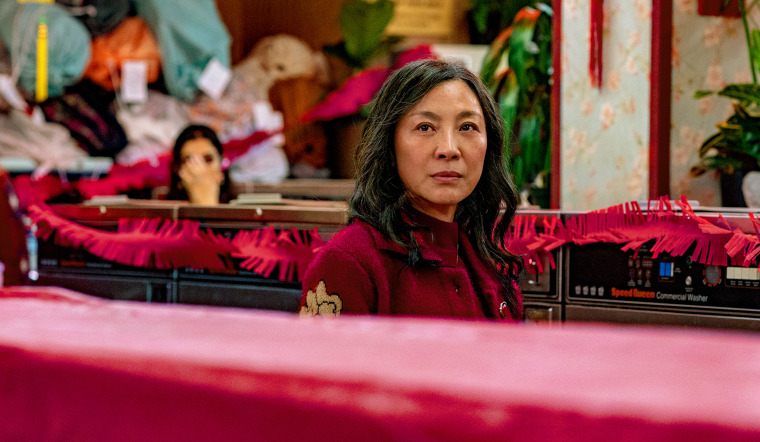 Asian American-led projects have been the standouts at this year’s award shows, and the Academy Awards nominations, which were announced Tuesday, were no different.

A24’s “Everything Everywhere All At Once” dominated the list with 11 nominations, the most for any film.

The sci-fi comedy, which follows a struggling laundromat owner (Yeoh) as she travels through multiple dimensions to save the multiverse with the help of her husband, Waymond (Quan), has won two Golden Globes and five Critics Choice Awards this year.

“As time went by — I turned 60 last year — and I think all of you women understand this as the days, years, numbers get bigger, the opportunities get smaller, as well,” Yeoh said during her emotional acceptance speech at the Golden Globes this month. “Then along came the best gift: ‘Everything, Everywhere All At Once.’”

Hong Chau, who plays Liz in A24’s “The Whale” with Brendan Fraser, was also nominated for best supporting actress.

“Naatu Naatu,” the hit song from the Telugu-language film “RRR,” scored a nomination for best original song, alongside “Everything Everywhere All At Once.”

The four-and-a-half-minute song was also the surprise winner at the Golden Globes and Critics Choice awards this month, beating out Rihanna, Lady Gaga and Taylor Swift. “RRR” also won the best foreign language film accolade at the Critics Choice Awards.

“Turning Red,” the coming-of-age story of eighth grader Chinese Canadian Meilin Lee — who unexpectedly turns into a red panda and must learn how to navigate puberty and be a dutiful daughter — landed the nomination for best animated feature.