Best Oscars Dresses Ever, According to ‘FASHION’ Editors 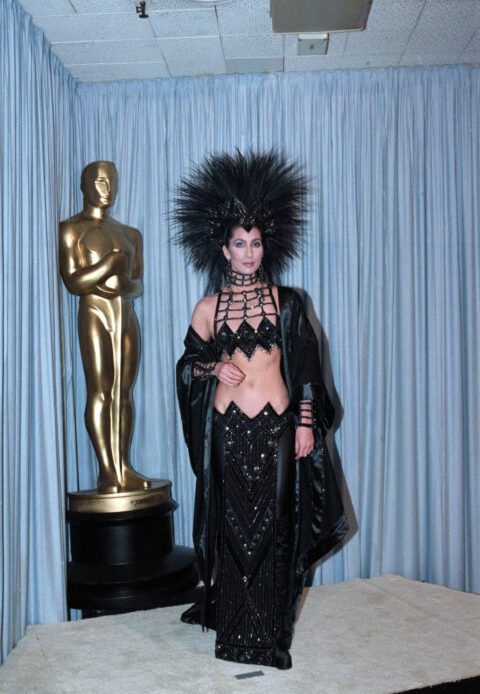 Including Céline Dion’s backwards suit and Cher in Bob Mackie, of course.

This article was originally published on April 21, 2021.

The 2021 Oscars are right around the corner and while the ceremony will look different this year because of the ongoing pandemic, there will still be a scaled-back red carpet (because who couldn’t use a little fashion fantasy right now?). In anticipation of the April 25 ceremony, FASHION editors chose their picks for the best Oscars dresses ever. Read on for why these unforgettable Oscars looks will go down in history.

And the award for Fashion Revenge goes to…Cher! The Bob Mackie creation might not be so shocking today, but in 1986 it ruffled more feathers than in the headdress that topped the wild and witchy look. Miffed at not being nominated for her role in Mask, the singer asked Mackie for a design that would convey her annoyance for not being taken seriously as an actress. Two years later she beat Meryl Streep, winning Best Actress for Moonstruck. —Bernadette Morra, editor-in-chief

We’ve seen many women sport tuxedos and suiting on the red carpet, but Billy Porter’s turn in a custom “tuxedo dress” by New York-based designer Christian Siriano stole the show in 2019. No stranger to going completely — and authentically — OTT with his event ensembles, Porter’s captivating look (a velvet tuxedo jacket and frilled, french-cuffed shirt mixed with a lush full-length velvet gown) was a major move forward for the notion of genderless dressing during one of the world’s most-viewed moments. A breath of fabulous fresh air, indeed! —Odessa Paloma Parker, fashion news director

Simply put, this Valentino Couture gown that Gemma Chan wore to the 2019 Oscars is a statement. There’s no hiding when you have a starched, ruffled collar emerging from…