Biden to Democratic leaders: ‘I’m tired of this trickle-down economics’ 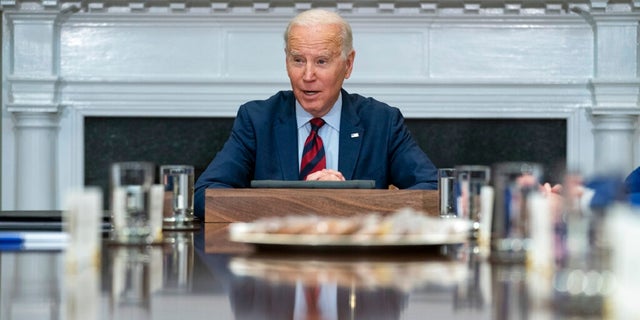 President Biden on Tuesday said he is tired of trickle-down economics in a meeting with Democratic congressional leaders.

“I want the wealthy to continue to be able to do well. But, look, I’m tired of this trickle-down economics,” he said. “I want to build this economy from the bottom up, the middle out, and when that happens poor folks have a shot, the middle class does well and the wealthy never get hurt.”

President Joe Biden speaks during a meeting with Democratic lawmakers in the Roosevelt Room of the White House. During the meeting, Biden touched on the economy and other issues.
(AP)

Biden has criticized Republican economic policies in the past. In October 2022, he blasted what he termed as “mega MAGA trickle down.”

“If Republicans get their way, the deficit is going to soar. The tax burden is going to fall on the middle class,” Biden warned Friday. “And Republicans are working really hard. And this was kind of — I have to admit every once in a while they surprise me. They have three — not one, not two — three plans to cut Social Security benefits. Three plans. It’s not going to stop there.”

During Tuesday’s meeting, which included Vice President Kamala Harris and other senior Democratic leaders, he said Republicans were serious about cutting Social Security and Medicare.

“I love their 30 percent sales tax,” Biden said. “We want to talk a lot about that but look, I have no intention of letting the Republicans wreck our economy, nor does anybody around this table in my view.”