Doomsday Clock ‘closest its ever been to midnight’ amid Ukraine war 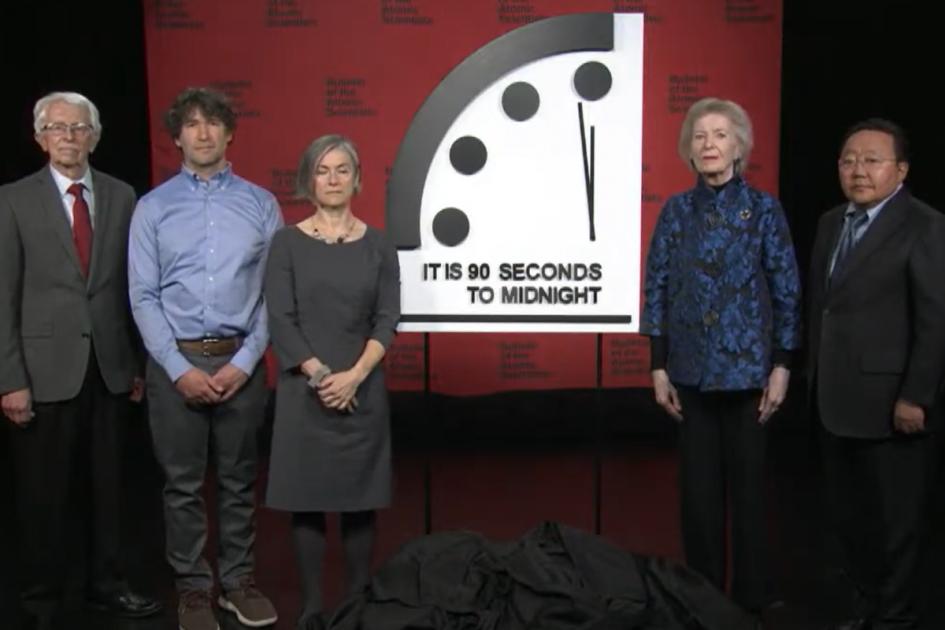 Atomic scientists have set the Doomsday Clock at 90 seconds to midnight, the “closest it has ever been” amid fears over the war in Ukraine among other dangers.

The decision was announced via live stream by the Bulletin of the Atomic Scientists, which has updated the unusual clock since 1947.

In the announcement, a voiceover said: “Today, the members of the Science and Security Board moved the hands of the Doomsday Clock forward, largely, though not exclusively, because of the mounting dangers in Ukraine.

They added: “That it is now 90 seconds to midnight,” before those in attendance removed a sheet from the large clock showing the change.

What is the Doomsday Clock?

The Doomsday Clock was started in 1947 just after the Second World War and is a visual representation of ‘how close’ man-made disaster is.

It is based on the opinion of the members of the Bulletin of the Atomic Scientists and is mostly just a metaphor for the threats present in the world at any given time.

The clock is reassessed every January and moved closer or further from midnight depending on members views.

What happens when the Doomsday Clock hits midnight?

Midnight on the Doomsday Clock is supposed to symbolise a man-made global catastrophe such as nuclear war and climate change.

According to the group, once the hands reach midnight, the planet will have undergone a ‘doomsday’ scenario.

PA – midnight represents ‘doomsday’ according to the Bulletin of the Atomic Scientists (Image: PA)

Is the Doomsday Clock valid?

While many people look to the Doomsday Clock to provide an accurate reading of how close the Earth is to ending, many people such as cognitive psychologist Steven Pinker have criticised the Clock as a “stunt.”

Pinker added that the Doomsday Clock is not based on any objective indicators, pointing out that the world was farther from midnight during the Cuban Missile Crisis in 1962 than in 2007.

What was the Doomsday Clock during the Cuban Missile Crisis of 1962?

During the Cuban Missile Crisis of 1962 when the United States and the Soviet Union were in a standoff over the placement of nuclear weapons in Italy, Turkey and Cuba, the Doomsday clock was at 2 minutes to midnight.

What’s the closest the…