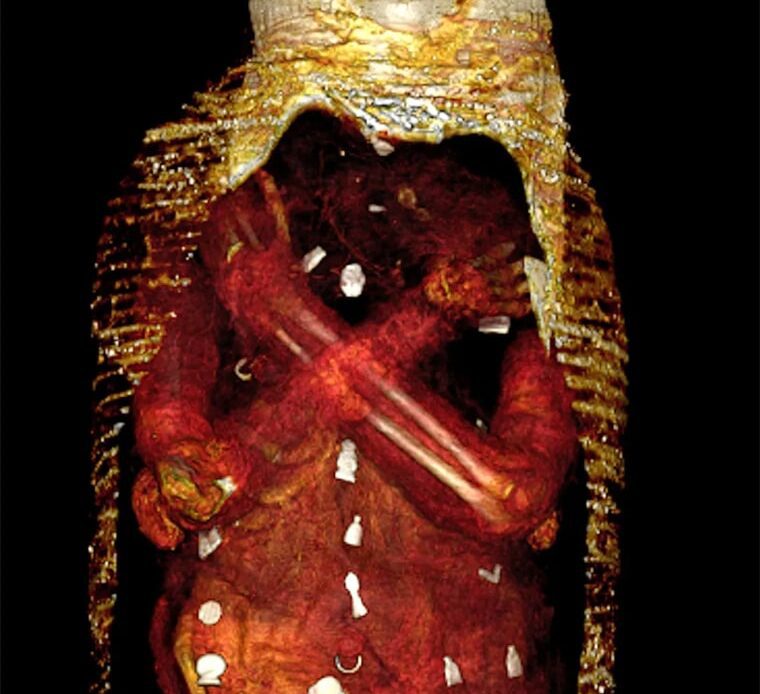 CAIRO — Known as Egypt’s “golden boy,” the mummified remains of a teenager buried 2,300 years ago have long remained shrouded in mystery. Now they have been “digitally unwrapped” by scientists, revealing intimate details that went undiscovered for over a century.

Radiologists at Cairo University in Egypt used CT scans to non-invasively unwrap the remains, uncovering signs of wealth as well as efforts to ensure his safe passage to the afterlife.

According to the authors of a study published Tuesday about the discoveries, 49 precious amulets adorned the remains, including a golden heart scarab that was used to replace the boy’s heart.

Egyptian embalmers placed amulets to protect and provide vitality for the body in the afterlife, and a gold tongue amulet was placed inside the mouth to ensure the deceased could speak in the afterlife.

Sahar Saleem, a professor of radiology at the faculty of medicine at Cairo University and a co-author of the study, told NBC News the undisturbed remains were revealing for both the socio-economic status of the boy — likely to have come from a wealthy family — and the significance of amulets in the afterlife, which was a central focus of ancient Egyptians’ complex belief system.

The body had undergone a “very expensive and meticulous modification process,” said Saleem, who has been digitally unwrapping mummies for years, including Pharaonic royals. “I would say that he came from some very rich family or maybe a noble family,” she added.

Saleem wrote in the study that “the heart scarab is mentioned in chapter 30 of the Book of the Dead: It was important in the afterlife during judging the deceased and weighing the heart against the feather of the goddess Maat.”

The mummified remains were discovered in 1916 at a cemetery in Nag el-Hassay in southern Egypt that was used between around 332 and 30 B.C., in what’s known as the Ptolemaic period. It was stored unexamined in the basement of the Egyptian Museum in Cairo until the new study.

Experts were able to determine that the boy was 14 or 15 years old, using the degree of bone fusion and the non-erupted wisdom teeth. He was 4 foot 2 (128 centimeters) and uncircumcised, and a cause of death could not be determined, the study said.

The boy’s remains were laid inside two coffins, an outer with a Greek inscription in black, and an inner wooden…