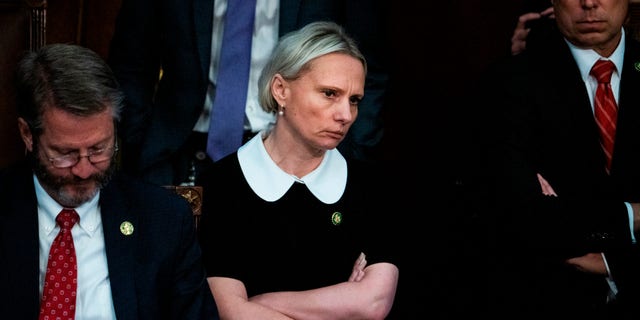 Republican Rep. Victoria Spartz of Indiana came out strongly against House Speaker Kevin McCarthy’s plan to kick some Democrats off their committees.

Before winning the House majority, McCarthy, R-Calif., had pledged to kick Reps. Adam Schiff, D-Calif., and Eric Swalwell, D-Calif., off the House Intelligence committee, as well as Rep. Ilhan Omar, D-Minn., from the House Foreign Affairs Committee. Spartz strongly condemned any such effort Tuesday, saying, “two wrongs do not make a right.”

“As I spoke against it on the House floor two years ago, I will not support this charade again. Speaker McCarthy needs to stop ‘bread and circuses’ in Congress and start governing for a change,” she added.

Rep. Victoria Spartz is seen on the House floor during a vote to make Kevin McCarthy speaker on Jan. 4, 2023.
(Tom Williams/CQ-Roll Call, Inc via Getty Images)

With only a narrow GOP majority, Spartz’s opposition could make it harder for McCarthy to keep his campaign promise.

The speaker of the House determines which members comprise the Intelligence panel, which is organized as a permanent select committee, granting McCarthy unilateral authority over it. But removing Omar from the Foreign Affairs Committee would require a majority vote in the House. Spartz and Rep. Nancy Mace of South Carolina have said they won’t support a GOP-led effort to kick the Democratic lawmakers to the curb.

Schiff, Swalwell and Omar made formal requests to the Steering Committee to be reinstated on their committees this month, supported by Democratic Minority Leader Hakeem Jeffries, D-N.Y.

“It is my understanding that you intend to break with the long-standing House tradition of deference to the minority party Intelligence Committee recommendations and deny seats to ranking member Schiff and Rep. Swalwell,” Jeffries wrote to McCarthy on Saturday. “The denial of seats to duly elected members of the House…